When Herod realized that he had been outwitted by the Magi, he was furious, and he gave orders to kill all the boys in Bethlehem and its vicinity who were two years old and under, in accordance with the time he had learned from the Magi. Then what was said through the prophet Jeremiah was fulfilled:

“A voice is heard in Ramah,
weeping and great mourning,
Rachel weeping for her children
and refusing to be comforted,
because they are no more.”
Matthew 2:16-18 / Jeremiah 31:15 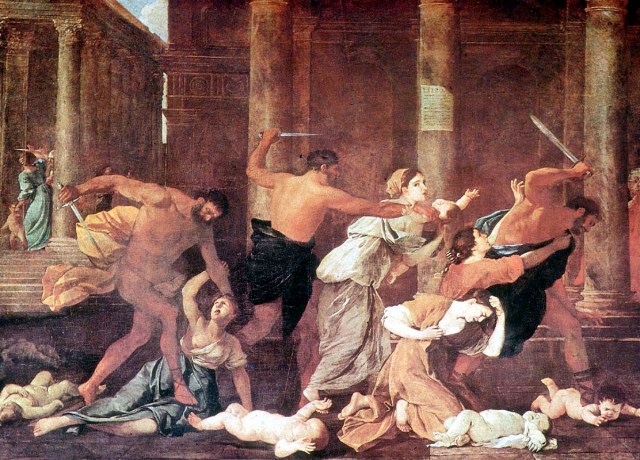 Nicolas Poussin / Massacre of the Innocents / 1628

To what extent will a man go in order to preserve his realm, his kingdom, his leadership, his position, his way of life?
To such an extreme as to order the murder of his two sons?
Or perhaps the death of every male child two years of age and under?
Could a grown man fear the birth of a baby so much that he will do the unthinkable?

Who can even begin to imagine the incomprehensible moments that the mothers of Bethlehem and beyond experienced that fateful day as the guards came with their swords. This thought mingles with similar disheartening moments that we have witnessed more recently with the taking of many innocent young lives across the globe.

“Blessed are you, Bethlehem in the land of Judah! You suffered the inhumanity of King Herod in the murder of your babes and thereby have become worthy to offer to the Lord a pure host of infants. In full right do we celebrate the heavenly birthday of these children whom the world caused to be born unto an eternally blessed life rather than that from their mothers’ womb, for they attained the grace of everlasting life before the enjoyment of the present. The precious death of any martyr deserves high praise because of his heroic confession; the death of these children is precious in the sight of God because of the beatitude they gained so quickly. For already at the beginning of their lives they pass on. The end of the present life is for them the beginning of glory. These then, whom Herod’s cruelty tore as sucklings from their mothers’ bosom, are justly hailed as “infant martyr flowers”; they were the Church’s first blossoms, matured by the frost of persecution during the cold winter of unbelief.