“Nothing is more practical than finding God, that is,
than falling in a love in a quite absolute, final way.
What you are in love with, what seizes your imagination will affect everything.
It will decide what will get you out of bed in the mornings,
what you will do with your evenings, how you spend your weekends,
what you read, who you know, what breaks your heart,
and what amazes you with joy and gratitude.
Fall in love, stay in love, and it will decide everything.”
Pedro Arrupe, S.J. 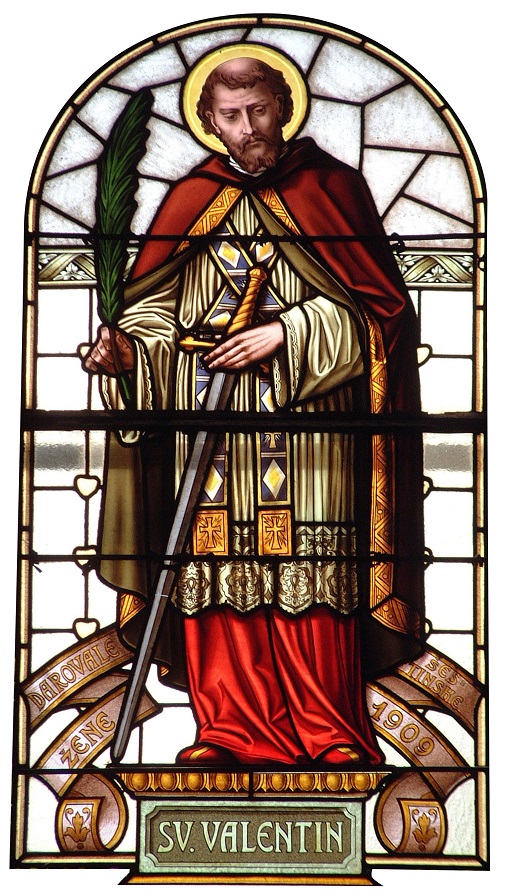 We’re off to celebrate a certain Mayor’s 2nd birthday.
Birthday on Monday.
Party on Saturday.

But before we get to birthday celebrations, we need to remember the day of all things Amore…
Yes, Dean Martin is indeed crooning in the background…

I wanted to stop long enough to consider the real person of Saint Valentine.

A Christian martyr versus the modern-day commercialized king of roses,
chocolate, and amore.

I caught this great piece yesterday on the Federalist regarding the life of the real
St. Valentine along with the story of his martyrdom.
The question posed was what might be St. Valentine’s thoughts regarding
today’s modern 21st century’s concept of marriage…?
Would he still sacrifice his life for today’s shifting thoughts on marriage?

Because that’s what St. Valentine did—he gave his life over to martyrdom for
performing Christian marriages— of which ran counter to the pagan thoughts of
marriage throughout Imperial Rome.
He would not bow to Ceaser nor Rome’s pagan gods.

This is a great piece—so please enjoy.
And just remember…there actually remains a real-life story…one of true agape love
which lies buried beneath those roses, chocolates and special romantic
dinners out.

Now off for the Mayorial celebrations!

Would Saint Valentine Be A Christian Martyr For Marriage Again Today?
We can especially feel an intense hostility towards the very idea of marriage that
Saint Valentine represented: the union of one man and one woman, centered on Christ,
and loyal until death.

One of the many legends about Saint Valentine is that he was a Christian priest martyred
by Roman authorities for secretly performing Christian marriages.
We used to think of Saint Valentine as the good guy in that scenario.
Today?
Not so much maybe, given the hostility towards the idea of Christian
marriage in our culture.

Saint Valentine would have committed a double offense by the time he was beheaded
in 270 A.D.
First, he defied Emperor Claudius II’s ban on marriage, a ban intended to create a
larger pool of effective soldiers by preventing young men from becoming attached to wives and families.
Second, as a Christian, Saint Valentine would have refused to bow down to false gods and the state,
and taught his brethren likewise.

The custom of burning incense to the pagan gods and to Caesar would have violated
the conscience of any devout Christian because it would be a public betrayal and rejection of Christ.
In addition, incense is significant in worship.

When the custom was in force, the authorities didn’t actually require anyone to
believe in the gods, but simply to go through the motions.
They thought it was no big deal. But it was a very big deal,
because the point was to enforce conformity and capture people’s consciences.

That’s not to say Christians uniformly resisted. Most likely obeyed,
while those who resisted were persecuted, even put to death.
Needless to say, this caused some division among Christians.

Christians during the great persecutions had a special example of
steadfastness in Polycarp, bishop of Smyrna, who was 86 when he was arrested
and martyred around the year 155. According to tradition, when brought to judgment,
the Roman proconsul was astonished to see in Saint Polycarp a venerable old man
he did not want to execute.

So he offered him what he thought was a generous out: if Polycarp would just
toss a teensy pinch of incense (not even noticeable) to Caesar, then he would be set free.
Of course, Polycarp would have none of that. So he was burned alive instead.
Sacrificial Love versus Shiny Object Love

There are plenty of other legends about Valentine and other saints.
The point is that Valentine’s Day originated as a celebration of the sacrificial love
upon which Christian marriage is based. To “be true” is to be willing to make the
ultimate sacrifice for someone, and to proclaim that love for better or for worse, until death.

Valentine’s Day is still filled with beautiful traditions, such as exchanging
heartfelt notes of love and gifts to those we care about.
Who doesn’t enjoy the beauty of roses and the deliciousness of chocolate?
Commercialization is a given, and often a testament to things we love anyway.

But in many ways Valentine’s Day got hijacked by the shiny objects offered by
the sexual revolution: self-gratification, “free love,” etc. For many, sexual attraction
or hooking up is the only reason to celebrate Valentine’s Day. Self-sacrifice?
What’s that?
Sacrificial love doesn’t sell.
Often people seek out others who practice it because they prefer not to practice
it themselves.
Funny how that works.

By 1998, Eve Ensler, author of “The Vagina Monologues” decided to dub the day “V-Day,”
which she said stood for “Victory, Valentine, and Vagina.”
Well, not much love and sacrifice there. V-Day is still around, with the
mission of raising awareness of violence against women, “both cis and trans.”
(Since 1998, of course, the V-Day folks discovered that “men can have vaginas.”)

In any case, the V-Day project represents a trend that seeks to separate men and women—
on Valentine’s Day.
Such separation is the end result of the sexual revolution.
After all, the push to legally abolish all sex distinctions is nihilistic,
especially towards marriage.
Hostility Toward Christian Marriage

As V-Day plods its cheerless way onward, we seem to be witnessing a revolve back
in the direction of persecution. First, there was a celebration of Saint Valentine
and sacrificial love, particularly in Christian marriage.
Then the predictable focus on romantic love, much of it in the Victorian era
that popularized the sending of Valentine cards.

With the sexual revolution, we get a more direct focus on sex as the centerpiece
of the festivities.
Predictably, the sexual revolution then spawned resentment rather than love,
now by using the day to raise awareness of wife-beating and other forms of
violence against women.

We can especially feel an intense hostility towards the very idea of marriage that
Saint Valentine represented: the union of one man and one woman, centered on Christ,
and loyal until death. His crime was to bring a man and a woman together while
the state meant to keep them apart.
The marriages he performed were anathema both to Roman imperialism and to
today’s worship of hook-up culture, adultery, divorce, and abortion,
all celebrated in the media and pop culture.

The hostility runs so deep that Christians today are told they must pay homage
to same-sex unions or else lose their livelihoods. It is not only happening in the wedding industry,
as florist Baronelle Stutzman and baker Jack Phillips can attest.
It is happening in all of society’s institutions.

This hostility against the timeless understanding of marriage as the union
of one man and one woman runs so deep that it is a heresy being forced into the
churches themselves, often through evangelical defectors, such as Joshua Harris and David Gushee.
Gushee uses his title as an evangelical ethicist to warn other Christians that if
they don’t follow the LGBT agenda, they’ll be rightfully smeared as bigots.

In a 2016 op-ed, he warned: “Neutrality is not an option. Neither is polite half-acceptance.
Nor is avoiding the subject. Hide as you might, the issue will come and find you.”
(That goes for you too, Saint Valentine!)
This sounds like a recipe for forced love, which is quite the opposite of love.
Anyway, for good measure, Gushee shared a laundry list of those who have signed on to
this manufactured, sold-and-bought zeitgeist:
corporate America, academia, psychologists, etc.

That’s been the basic idea behind political correctness all along:
deny your conscience, shut up, and publicly prostrate yourself before the elitists
who operate this zeitgeist machine. Otherwise, to the stake with you.

Devout Christians know, of course, that this is the same old stuff served up to their
forerunners when they were told to bow down to pagan gods.
Yes, bowing down to the pagan gods was popular all right, since the alternative,
as always, was to be smeared and skewered. Just call it “the right side of history”
and you’re good to go.

Yet even one person who does not betray conscience in the face of
such punishment can change the world by injecting some truth into it.
Perhaps that is why the enemies of free conscience are on a constant
search-and-destroy mission to “come and find you.”
But in the end, true sacrifice—the kind that comes without deep-pocketed
lobbying—can breed real love. And, as Saint Valentine showed, real love can’t be forced.

Stella Morabito is a senior contributor to The Federalist