“Nothing from nothing leaves nothing,
Ya gotta have something”
Billy Preston (Nothing from Nothing song lyrics)

You have to create something from nothing.
Ralph Lauren

“We can know only that we know nothing.
And that is the highest degree of human wisdom.”
― Leo Tolstoy

We have a growing pile of debris that has risen and fallen over the course of our time living here at this house. It sits right on the edge of the property just at the periphery of woods which surround our property on two adjoining sides. It’s where we usually put all of our clippings from the bushes, any fallen tree limbs, discarded shrubs and spent flowers. I think of it like a rather large compost pile that ebs and flows with the passing seasons.

After this spring’s big yard re-do, the brush pile grew exponentially as the landscapers dumped stumps, stripped grass, and discarded shrubbery lost to the change.

There have been a few past Christmas trees which have found their way to the brush pile, as well as numerous pumpkins that just didn’t seem to survive the Fall, petering out before Thanksgiving.

And it is to these pumpkins that my recent attentions have now turned. . .

The other evening when I was dumping some grass clippings on the pile, I noted a squash-like vine emerging from the debris spreading out in two separate directions. I pleaded with my husband not to mow over the vine because I was exciteed to see what might happen if we left it to grow. . .
He throws in some comment about needing another plant for pollination so it won’t ever come to anything. . . but I countered with a “leave it to the bees and we’ll see. . .”

Low’n’behold, a white pumpkin is now growing from my debris pile.
I remembered back to last Fall when I had bought a multitude of heirloom pumpkins—there were indeed a few white pumpkins in the mix. . .
I am so excited!
A bonus pumpkin, given as a small gift from the compost. . . 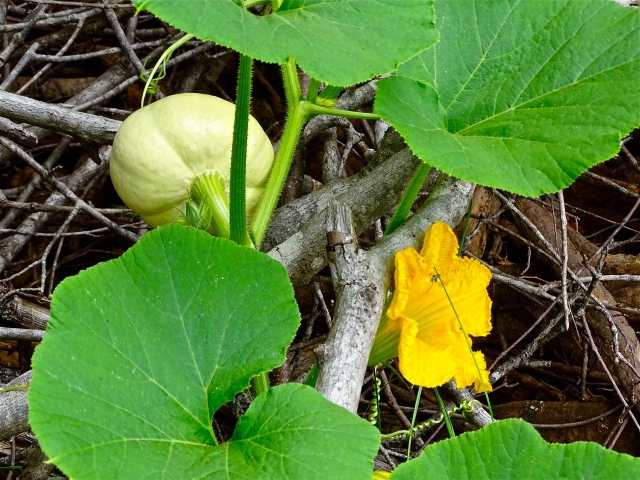 Which brings me around to another sort of thought. . .a real thought about debris, reclaiming, and growth.

Many many years ago when I was a college sophomore, attending a very large state university, I found myself in a familiar situation that a great many young Christians find themselves in when heading off to college—that surreal state of desperately seeking that hidden balance between one’s faith and one’s life while taking in the whole college experience–
Greek life, parities, sports, dates, new friends, new thoughts, new experiences, liberal minded professors and courses, challenges, questions and hidden insidious digs executed from the dark one—all of which are attacks upon a fragile young threatened faith.

I rode the waves.
Sometimes staying on top, wildly riding the monster wave. . .other times, I was falling off the proverbial surf board of life, miserably wiping out while nearly drowning in the crashing waves.

Having come home one weekend, during an away football game no doubt, I found myself sitting in the office of one of my priests from my home church, having a bit of a late afternoon confession session.
I had failed miserably and instinctively knew I needed a good dose of wisdom, tough love, and true Christian absolution.

Patiently he listened. . .
offering a tissue,
while quickly cutting through the crap.
Saying something that has stayed with me all these many years later. . .
“it doesn’t matter what you have done–it doesn’t matter what you still may do, or how bad you may have been or how bad you may yet be—even if you’re covered from head to toe in dog crap, God still wants you, cares for you, loves you. . .nothing you have done is going to separate you from His love as long as you continue to seek His Grace. . .
We call that unconditional love. . .”

It was a never give up on yourself sort of talk.
While being countered with the need for change on my part talk. . .
the stop being a yo-yo Christian sort of talk.

I’ve used that same line of thought with lots of my kids over the years at school and I’ve had to recall it often in my own life.
I’ve fallen lots of times over the years.
I’ve screwed up.
I’ve gotten to that place when I’ve felt as if this time was it. . .as in, it’s all over.
I’ve done it for sure this time, there’s no going back. . .
I’m done, I’m toast, all chances are up, chips are cashed in, there’s no going back. . .

I think we’ve all gotten to that place in our lives when we’ve felt as if we’ve gone too far.
We’ve crossed the line and we just figure there’s no going back. God has washed His hands of us and finally walked away—or at least He should walk away.

We shrug our shoulders, as we toss our spiritual beings on the brush pile out back, believing our relationship with an unseen God is over as we’ve pushed the envelope just one time a little too far.

Yet God has never given up on the junk out back.
There’s life to be had in that compost.
It might be a volunteer pumpkin or it might be a redeemed heart and soul. . .
Either way. . .there’s always HOPE in that which was thought to be nothing. . .

For you know that God paid a ransom to save you from the empty life you inherited from your ancestors. And it was not paid with mere gold or silver, which lose their value. 19 It was the precious blood of Christ, the sinless, spotless Lamb of God.
1 Peter 1:18-19