“Power is a poison well known for thousands of years.
If only no one were ever to acquire material power over others!
But to the human being who has faith in some force that holds dominion over all of us,
and who is therefore conscious of his own limitations, power is not necessarily fatal.
For those, however, who are unaware of any higher sphere, it is a deadly poison.
For them there is no antidote.”
Aleksandr Solzhenitsyn 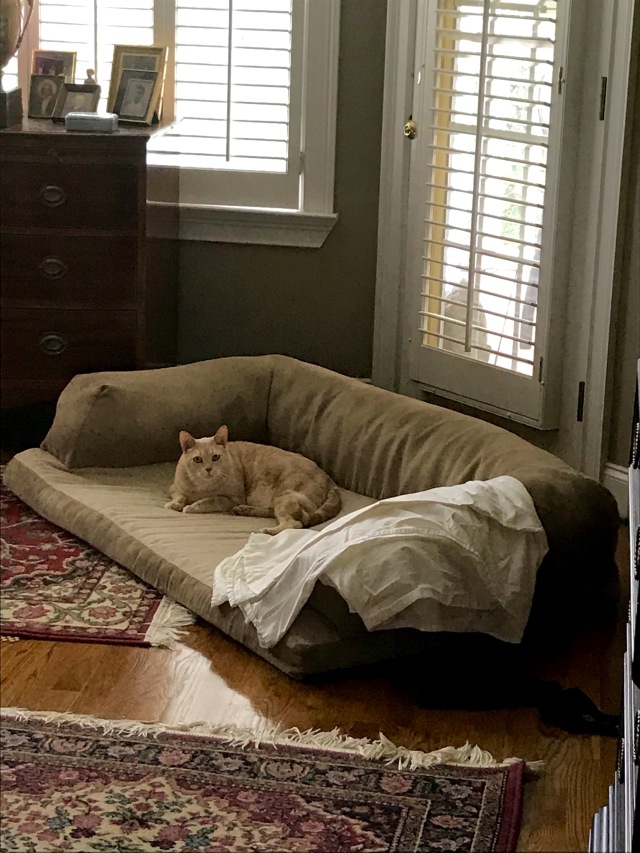 There is a sequence of events taking place within these images…
And believe it or not,
it has everything do with authority, respect and fear and the presumption of each.

First we should note that there is a giant dog’s bed that has been placed
in an otherwise dog free bedroom.

A cushy enough looking bed that cousin Alice sleeps on at night.

In the first image we see cousin Percy taking a look at
85 pound cousin Alice resting on the floor and not in her bed…
as a million questions now race through cousin Percy’s thoughts.

Next, cousin Percy looks to see if anyone else has noticed this anomaly.
A bed but the owner of said bed is opting not to use it, instead preferring the floor….
Hummmmmm…

In the next image we see that cousin Alice is nowhere to be seen and that cousin Percy,
deducing that the coast is clear, has decided to try out the bed.
Not that cousin Percy doesn’t have real beds at his disposal or closet shelves or
couches or anywhere in the house that he wants…but it is this visiting bed,
belonging to cousin Alice, that seems most appealing.

Lastly we see cousin Percy sound asleep.
Happy and content.
Cousin Alice’s favorite toy, the Yoda chew doll, sits on the floor right in front of a sleeping
cousin Percy and what we don’t see is cousin Alice, who is just out of camera shot, and who
is afraid to come in the room to get either favorite said chew toy Yoda let alone
get on her bed lest she wake the sleeping giant….

So here we have a small example of what authority is all about and what it means to
have respect… or in this case, a bit of fear of and for said authority.
And of course, there are all sorts of side lessons in all of this but let’s just consider the
concept of authority for now.

Authority is defined by Merriam Webster as:
a power to influence or command thought, opinion,
or behavior…as in the president’s authority.
b : freedom granted by one in authority: right..
as in Who gave you the authority to do as you wish?

2 a : persons in command; specifically : government…
as in the local authorities of each state
b : a governmental agency or corporation to administer a revenue-producing
public enterprise…as in the transit authority or the city’s housing authority

3 a : grounds, warrant…as in had excellent authority for believing the claim
b : convincing force…as in lent authority to the performance

We should note that throughout history, humankind has been expected to have respect
for authority…
And we might note that throughout this history of humankind,
that such words as ‘respect’ and ‘fear’ have been used interchangeably…
with fear not necessarily meaning cowering like a mouse but rather
being full of overwhelming awe….

Example being that some biblical translations use the word “fear of the Lord,
while a more accurate translation would be “respect for the Lord”…
but we’re getting a bit ahead of ourselves.

This business of authority, as well as that of having respect for said authority,
got its start with that whole creating of man and woman…as in Adam and Eve…

Next with Adam and Even having dominion over all of the animals, fish and birds…
they, these creatures of the earth, in turn then fell under authority of the God
followed by man and woman…

And we should note that any offspring of Adam and Eve, as they were the first,
then said offspring would therefore also have dominion over the animals, birds and fish….
And on and on it was to flow.

Add to all of this the lynchpin of respect.
Respect for and of one for another…
The tie that binds it all up.
A perfect scenario.

Yet unfortunately the chain of authority and respect fell into disrepair with that
first bite of an apple…
For you see God afforded this man and this woman the gift of free will.
And here is the kicker…..
they were not slaves who were to be forced under authority….
they were to come under authority freely and willingly…because within that
authority was the most perfect expression of Love.

And oh how perfect it all could have been…..

And as we now see, looking back over the annals of time, history has shown us that not
all authority since the fall has been kind nor benevolent.
Because in that fall from grace, free will gave way to poor choices..
choices that have been more selfish rather than selfless..
choices that have held very little regard for the dignity of person upon person.

With all of this business harkening back to that original initial sin and disobedience…
of which in turn begat pride, envy, jealousy, selfishness, arrogance, cruelty, disrespect…
ad infinitum…

Yet just because we know that there have been those who have abused their authority
over others, and that there have been times that said authority had to be eliminated
or even rebelled against, the overall notion that a civil society has a chain of authority
which is a lynchpin to living…has been the glue that has held the precariousness of man
together.

And thus we see cousin Percy exerting his authority as kingpin of the home over his
visiting cousin Alice by deciding that what is hers should actually be his…
or at least for a little while.

And on the flip side we have cousin Alice, who despite her sheer size and body strength,
who could eat cousin Percy in one maybe two bites…defers to this pint size king
out of an overwhelming sense of awe, fear and respect….

Hence….
authority, fear and respect in a nutshell….

“Don’t be scared by the word authority.
Believing things on authority only means believing them because you’ve been told them
by someone you think trustworthy.
Ninety-nine per cent of the things you believe are believed on authority.
I believe there is such a place as New York.
I haven’t seen it myself.
I couldn’t prove by abstract reasoning that there must be such a place.
I believe it because reliable people have told me so.
The ordinary man believes in the Solar System, atoms, evolution,
and the circulation of the blood on authority—
because the scientists say so.
Every historical statement in the world is believed on authority.
None of us has seen the Norman Conquest or the defeat of the Armada.
None of us could prove them by pure logic as you prove a thing in mathematics.
We believe them simply because people who did see them have left writings that tell us
about them: in fact, on authority.
A man who jibbed at authority in other things as some people do in religion
would have to be content to know nothing all his life.”
C.S. Lewis

“Now a government is secure insofar as it has God for its foundation and His Will for its guide;
but this, surely, is not a description of Liberal government.
It is, in the Liberal view, the people who rule, and not God;
God Himself is a “constitutional monarch”
Whose authority has been totally delegated to the people,
and Whose function is entirely ceremonial.
The Liberal believes in God with the same rhetorical fervor with which he believes in Heaven.
The government erected upon such a faith is very little different, in principle,
from a government erected upon total disbelief, and whatever its present residue of stability,
it is clearly pointed in the direction of Anarchy.”
― Seraphim Rose

“I believe in political equality.
But there are two opposite reasons for being a democrat*

You may think all men so good that they deserve a share in the government of the commonwealth,
and so wise that the commonwealth needs their advice.
That is, in my opinion, the false, romantic doctrine of democracy.

On the other hand,

you may believe fallen men to be so wicked that not one of them
can be trusted with any irresponsible power over his fellows.

That I believe to be the true ground of democracy.

I believe that if we had not fallen…patriarchal monarchy would be the sole lawful government.
But since we have learned sin, we have found, as Lord Acton says,
that ‘all power corrupts, and absolute power corrupts absolutely.’

The only remedy has been to take away the powers and substitute a legal fiction of equality.
The authority of father and husband has been rightly abolished on the legal plane,
not because this authority is in itself bad (on the contrary, it is, I hold, divine in origin),
but because fathers and husbands are bad.

Theocracy has been rightly abolished not because it is bad that learned priests should govern ignorant laymen, but because priests are wicked men like the rest of us.
Even the authority of man over beast has had to be interfered with because it is constantly abused.”
C.S. Lewis, The Weight of Glory