The continued persecution of Christians in the Middle East is one of the great
underreported stories of the 21st century.

Douglas Murray, in his insightful book The Strange Death of Europe,
warns us that there is a real danger of Europe losing its Christian roots,
values and freedoms, something which he as a gay atheist deplores.
I fear that the conversion of the Hagia Sophia into a mosque is a sign of more
troublesome times ahead.
David Robertson 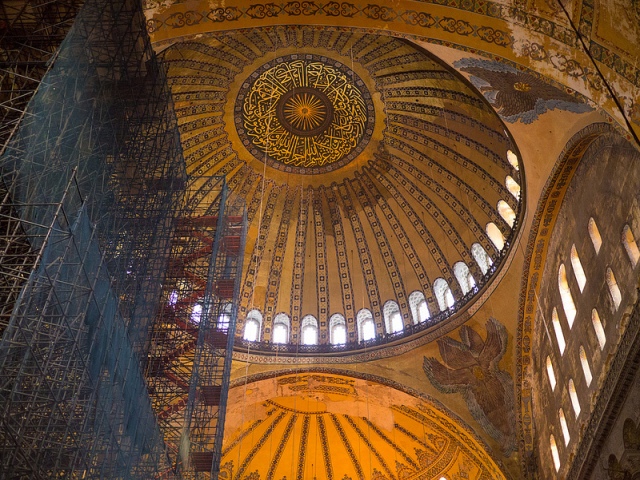 The other day I offered a post regarding the news that the once-massive
Christian enclave of the East, the Basilica of Hagia Sophia,
had once again fallen to Muslim rule ( or perhaps ‘once again’ is not accurate as Muslim rule has shadowed the church since the 15th century–it just hasn’t been a practicing mosque but rather a museum in a Muslim nation)

Hagia Sophia, constructed in 532, stood as a Christian beacon in the East, as well
for the West following the sack of Rome, until 1453–
the year when Constantinople fell to the Ottomans.
She was desecrated and turned into a mosque.

Several hundreds of years passed when the mosque next became a museum.

And then change came once again last week when the church turned mosque,
turned museum returned to a Muslim Mosque.

For nearly a thousand years, she faithfully served her flock.

David begins his post by reflecting on the demise of Christianity
in the very place of her inception, the Middle East…

The Assyrians for example have shrunk from 1.3 million in Iraq to less than 250,000.
They have scattered over the world.
There are around 40,000 Assyrians in Sydney – one of whom is my barber!
In Turkey, Christians are systematically persecuted.
Foreign church workers are arrested and expelled;
evangelical churches are regularly attacked by extremists.
To even suggest that the killing of over one million Armenians by the Turks in 1914-1923
was genocide will result in you going to jail.
I recall in 2007 being in Ephesus just after three Christian leaders
had been brutally tortured and killed –
the fear amongst the Christians was palpable.

I suspect that turning the Hagia Sofia into a mosque will only make things worse
as it will encourage the more radical Islamists to fulfil their dream of a society
where Sharia law is fully enacted, and the Christians and secularists are removed.
Another Hagia Sophia in Nicaea, where the Second Council of Nicaea was held in 787,
has already been turned into a mosque. It is a concerning development which
raises a number of questions.

Turkey has, like China, signed the UN’s Declaration of Human Rights,
which amongst other things, guarantees freedom of worship, expression and belief.
Like China, it appears that its signature is meaningless.

Another area of concern is the problem of the lack of freedom in many Islamic countries.
In the West, Muslims are rightly free to worship and build mosques –
something I have defended in the past and will defend again.

There is a bigger issue here.
I have no problem with there being different religions within a pluralistic and tolerant society.
But what if that religion itself is opposed to pluralism and tolerance,
which I argue Islam is, and seeks to impose its own Sharia law?

A casual observer might think that David’s feelings are somewhat racist in that he is concerned
about a Scottish neighborhood becoming Muslim, but he clearly notes that Islam is
not a race but rather a religion…and it is one that has at its core the goal of
the decimation of Christianity…

And so yes, there are big questions that remain—
What is happening to the Chruch from both within and from with-out

“Empires not based on peace are not blessed by God.
Politics divorced from justice betrays those who wish this to be so”
Pope Pius XII

Blessed is the nation whose God is the Lord,
the people he chose for his inheritance.
Psalm 33:12

Empires have risen and Empires have fallen…
Nations that once prospered have perished and disappeared.

Where did they go?
What really happened?

Great, rich, powerful, intimidating, influential..
Each simply ceased and are now oddly no more.
Lost somewhere along the winds of Time.
Yet their descendants quietly now roam the earth.

Was it…
Catastrophe?
Plague?
Self destruction?
Natural disasters?
Wars?
Revolutions?

Or was it merely fate?

As in…
Persevering
Maintaining
Growing
Surviving

What were…
Their goals
Their desires
Their mission
Their purpose

Were their pursuits pure…
Their desires true?

Were lessons learned…
Or will mistakes be repeated?

Are we today, better, because of them?
Learning from what went before…

Destined, perhaps even cursed, to the same demise of those who have gone before…
Simply disappearing into the memory of Time…
…along with all those who once were powerful, mighty and great…?

Maybe something better than before…?

But if serving the Lord seems undesirable to you, then choose for yourselves this day whom you will serve, whether the gods your ancestors served beyond the Euphrates, or the gods of the Amorites, in whose land you are living. But as for me and my household, we will serve the Lord.”
Joshua 24:15