“Suffering, gracefully accepted, refines the human heart,
and the experience of darkness sharpens the vision of the spirit.”
Paul Glynn, A Song for Nagasaki:
The Story of Takashi Nagai:
Scientist, Convert, and Survivor of the Atomic Bomb

According to Wikipedia Spam is (stylized SPAM) is a brand of canned cooked meat made
by Hormel Foods Corporation.
It was first introduced in 1937 and gained popularity worldwide after its use during World War II.
By 2003, Spam was sold in 41 countries on six continents and trademarked in over 100 countries
(not including the Middle East and North Africa).

According to its label, Spam’s basic ingredients are pork, with ham meat added, salt,
water, modified potato starch as a binder, sugar, and sodium nitrite as a preservative.
Natural gelatin is formed during cooking in its tins on the production line.
Many have raised concerns over Spam’s nutritional attributes,
in large part due to its high content of fat, sodium, and preservatives.

I also understand it’s the “national” food of Hawaii as “Hawaiians sometimes call it
“Portagee Steak” oddly my money was always on the pineapple.

And also according to Wikipedia Spam or rather Spamming is:
Electronic spamming is the use of electronic messaging systems to send an
unsolicited message (spam), especially advertising, as well as sending messages repeatedly
on the same site. While the most widely recognized form of spam is email spam,
the term is applied to similar abuses in other media:
instant messaging spam, Usenet newsgroup spam,
Web search engine spam, spam in blogs, wiki spam, online classified ads spam,
mobile phone messaging spam, Internet forum spam, junk fax transmissions,
social spam, spam mobile apps, television advertising and file sharing spam.
It is named after Spam, a luncheon meat, by way of a Monty Python sketch about a
restaurant that has Spam in every dish and where patrons annoyingly chant “Spam!”
over and over again.

I must confess that I have never tried Spam.

I never cared for bologna so I kind of figured I wouldn’t care for Spam.
I’ll just stick to ham.

However that other kind of Spam…
well let’s just say I’ve had my fair share of that unappetizing mess.

We all get the e-mails, the phising (not fishing), the viruses (electronic and not physical),
the phone scams etc…
and yet we must admit it happens here in blogland as well.

Ever so often I’ll go into the comment section on my admin page in order to see if anyone
has been earmarked as spam.

I know that some of my blogland friends will make comments on posts and I will receive
an email notification along with the regular WP notification.
Yet every once in a while a friend’s comment is deemed spam by good ol AT&T.

WP is also prone to throwing friends into the black abyss of either ‘awaiting moderation’
or simply delightfully chunking them to spam. I too have been the victim of being chunked.

So yesterday I went into my site in order to check the spam allotment while
trashing what was indeed a bunch of junk as I sought to rescue anyone who had been
sorely misplaced.

Yet I stopped long enough to skim over one offering in particular that was about as vulgar
as it gets…and to think they were targeting poor ol Taylor Swift.
Not being one who stays up with the music scene…I don’t know why Ms. Swift should be so
grossly vilified, but gross it was.

My knee-jerk reaction, before pushing delete, was to simply bemoan the level of sickness
and vileness that runs rampant across our senses.

And so I was struck by the contrast of such thoughts of spam..thoughts for its reasons,
its uselessness and its dark and evil agendas countered by the thoughts of one who
lived to survive chaos and evil and came to know both peace and worth…
hope and salvation…

All of us will have to render an account of our lives when we die.
God will not be interested in who or what we were.
No, only in this: how did we live?
That will be the sole matter for judgment.
A company director won’t be able to pull rank on a waiter,
and a fisherman’s wife will be on a par with a millionaire’s wife.
Ships’ officers will receive no preference over ships’ cooks.
All will be judged by exactly the same measure:
did we use our talents well and for his glory?
Takashi Nagi
from A Song for Nagasaki
(Takashi Nagai, a survivor of the atomic bomb and convert to the Catholic faith
who lived a life of heroic virtue in the face of great tragedy) 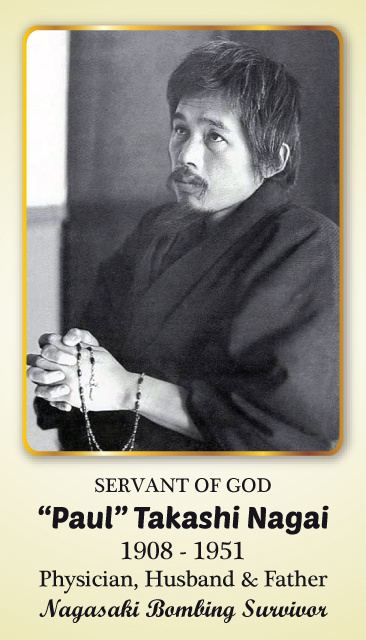 The words of Takashi Nagai pointedly reminds us that we must consciously choose how it is we
wish to use our ‘talents’…those abilities bestowed upon us long before our birth…
gifts, abilities, and talents endowed upon, and found within, each of us—
given to us all by grace form the Father and the Creator to His created and children.

Will we opt to use them for the betterment of others and to God’s glory or will we use them
for the detriment of others and of self?…
Detriments much like the annoying spam folks are wasting their precious time over by creating and
sending to tiny little blogs like mine?

As each has received a gift, use it to serve one another,
as good stewards of God’s varied grace:
1 Peter 4:10