“To be defeated and not submit, is victory;
to be victorious and rest on one’s laurels,
is defeat.”
Józef Piłsudski

Is it just me or is this how many of us are feeling these days?

All wrapped up by something menacing, trying its best to not only entangle us but to
consume us and suck us down to the depths of the sea?

Yet in actuality, this is a statue of Neptune trying to spear an entangling octopus.

However, it might as well be a statue of any one of us…an image of any average American
who is working frantically and desperately to fend off the current craziness consuming our Nation. 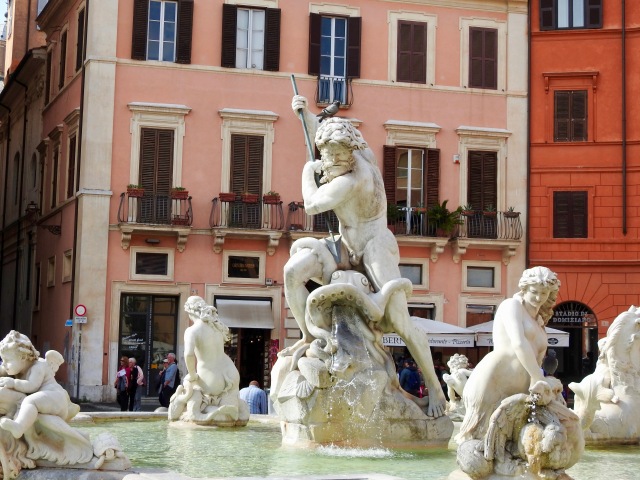 The fountain is within the enclosed piazza, or what we Americans call a plaza,
perched in the heart of Rome.
It’s the piazza where we will find the statue of the sea god Neptune perpetually at battle
with an aggravating octopus.

There is a massive fountain in the center of this piazza by the famous artist Bernini flanked
by two lesser fountains on either end of the piazza, each by different artists.

The Neptune fountain as it is known is The Fountain of Neptune
(Italian: Fontana del Nettuno) and is located at the north end of the Piazza Navona.
It was once called “Fontana dei Calderari” because it was located close to a small
alley with blacksmith’s workshops, makers of pots and pans and of other metal-based
businesses, all of them generating heat.
(Wikipedia)

I saw this statue of Neptune and immediately felt the connection.

Entangled, enraged and working fiercely to be set free.

I think of Satan being much like the octopus…he wraps his arms and
tentacles around us, squeezing us, squeezing out our very breath while attempting
to pull us down and under.

But rather than the fictitious Neptune left to fend off this ravenous enemy,
we have Jesus who, rather than a spear, used a cross to permanently defeat this
ancient nemesis.

Being eternally defeated, this ancient foe, however, continues fighting while we are left
to wander this, his realm.

He is working fast and furious, as time is not on his side, to steal as many
of us he can with his unrelenting grasp.

He is frantically pitting us all…one against another.
Driving dividing wedges deep within the heart of our nation and deep into the hearts of us,
her people.
And sadly, each night the news seems to triumphantly share how well his efforts are
actually working.

Yet God has sounded the warning.

The war, He reminds us, is actually long won…
Yet He also reminds us that this defeated menace will not surrender while the sun still
rises and sets over his domain..not until the very end…
not until he has done his best to snare us as his prey.

To divide, to separate and to conquer, taking who and what he can.

As choices continue to remain.

For if we turn our backs on the Lord our God and on all that He has done,
as so it seems that our nation has, there will be consequences.
This much we have been told.

Or have we allowed the arms of hate and evil to reach too far while ignoring
the consuming strength of a beast that will not stop until he pulls us all under.

So pray that your flight will not take place in winter or on the Sabbath
Matthew 24:20

If my people who are called by my name humble themselves,
and pray and seek my face and turn from their wicked ways,
then I will hear from heaven and will forgive their sin and heal their land.
2 Chronicles 7:14