“There is no exquisite beauty… without some strangeness
in the proportion.”
Edgar Allan Poe

Whereas this unexpected early December Southern Snow has blanketed us with a
deep white blanket of mystical silence and stillness…it has not come without
a wealth of woe….

The school systems in and around the Atlanta metro area…north and westward…
school systems who usually err on the side of caution actually decided to listen
to our meteorologists who glibly reported that,
whereas it looked as if there would be some snow….,
we’d been so warm up to now that any snow would be fleeting.
A lite dusting that wouldn’t stick to roadways or driveways as it had just been
simply too warm for any real need for worry.

In other words, a short lived event.

This was to be taking place on Friday.

So on Friday, everyone opted to go about life as normal…
This is the deep South you know….we don’t really worry about winter weather
this time of year.

And so right on que the rains came, turning eventually over to snow.

And then it snowed and it snowed, and it kept on snowing…..

The schools scrambled and quickly decided that perhaps they should release the students…
And so we had everyone in a myriad of counties all starting to unleash madness
upon the roadways all at the same staggering times.
Staggered releases seemed to be the best option…yet it was still snowing…hard.
Snow and ice were beating the release times.

Buses found it impossible to deliver their tender cargo as the snow and ice
were blanketing roadways…making traveling up and down hills impossible.

Our very pregnant daughter-n-law, who teaches here in our county but lives in Atlanta,
opted to come to our house verses trying to navigate the snowy icy interstates back
home to Atlanta as the News was painting a terrible traffic picture.

A typical 15 minute drive to our house from her school actually took her 2 hours…
as cars were now slip sliding away.
In fact my husband had to go meet her a mile from our house as cars had simply stopped
in their tracks on the roads as others had landed in the ditches and she was stuck in
the middle. It took him 30 minutes to get to her…a drive that should have taken two minutes.

Meanwhile, limbs were falling left and right in Atlanta.
It is a city known for her plethora of beautiful trees…yet snow and ice are not
kind to trees.

A snow laden limb fell on our son and daughter-n-laws house,
literally ripping out the power lines from the house….lines now laying dangerously
across the lawn.

GA Power has come to access the issue and now needs one of their certified
electricians to come out and reconnect the lines into the house before
they can re-run the lines from the pole to the house…
lest all things blow up.

Our son, dad’s cat and the grand dog are hunkering down in the dark, without heat
as the temperatures plunge down into the teens….
waiting for word of this elections.

As God watches over both animal and man who remain without…. 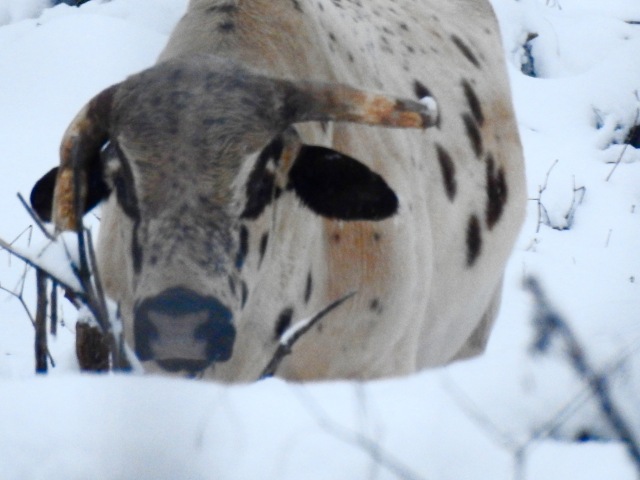 (notice to the left of the two bulls, the wee head peering out from the crack
in the dilapidated barn) 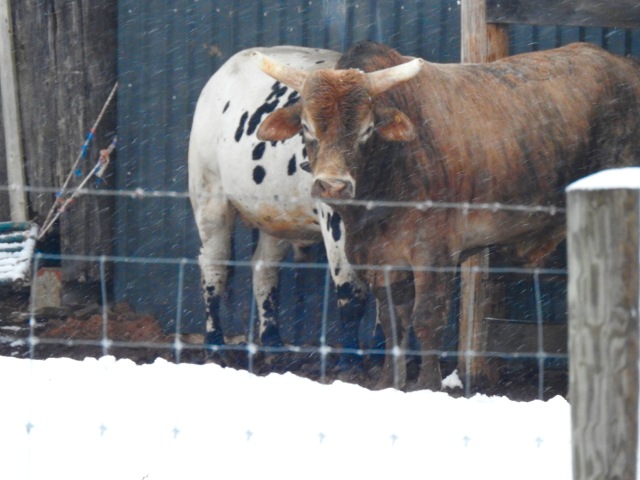 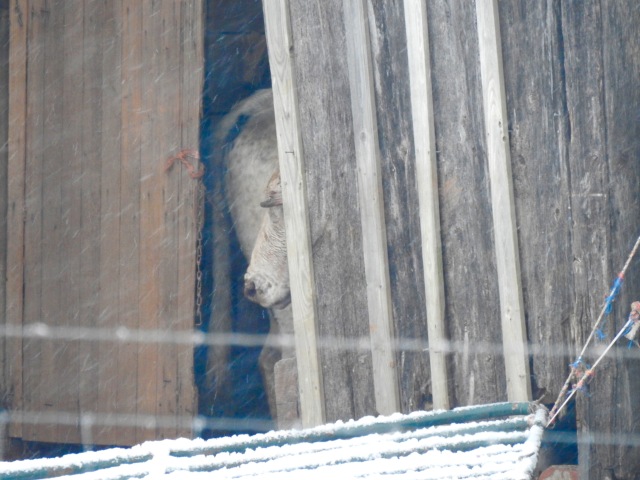 But let all who take refuge in you be glad;
let them ever sing for joy. Spread your protection over them,
that those who love your name may rejoice in you.
Psalm 5:11