(a statue of Christ on the Charles Bridge , Prague, The Czech Republic / Julie Cook / 2012)

What is it that sets us apart form the other creatures on this planet our ours?
Other than that opposable thumb business?

Is it perhaps our ability to be compassionate and kind?
Perhaps to reason and analyze?
Or is it is our capacity to be creative. . .that ability to dream, to imagine, to think and therefore to compose, to construct, to paint, to sing, to sculpt, to dance and to build. . .

The ability to even take that which has been ruined and destroyed, even by our own hands, and to remake, rekindle and renew. . .?

I had not intended to have such a serious minded post again this week but it appears that forces beyond my control thought better of my initial decision. . .

Today’s news is laced, once again with the heinous beheading by ISIS of another innocent bystander–another victim to their ravenous thirst for innocent blood. This time it was an 82 year old Archeologist taxed with preserving and saving the ruins of Palmyra.
It seems they held this gentleman for the past month, torturing him in an attempt to discover where the vast treasures of this ancient, and to some holy, site were hidden. He never shared that information with his captors, who knows if he even was aware of hidden treasure, so it was another case of “off with their heads”. . .

In Charles Kaiser’s book “The Cost of Courage” which I shared in yesterday’s post, Mr. Kaiser retells the story of the Vichy Parisian Mayor, Pierre-Charles Taittinger who, following the invasion of Normandy which was the telling realization for the Nazis that their time of Occupation in Paris, as well as all of France, was drawing dangerously to its finale, approached the Nazi’s high commander, General Choltitz, with his final plea for the Germans to spare the city.

It was well known and documented that if Hitler had to relinquish the City of Lights back into the hands of the Allies, then they would not receive a city at all but rather one that had been razed and burnt to the ground. Every bridge crossing the Seine, as well as every monument from the Eiffel Tower to Napoleon’s Tomb had been wired with explosives. The fleeing German troops were to detonate and burn everything in their wake as they left the city.

Monsieur Taittinger implored the General one last time:
“Often it is given to a general to destroy, rarely to preserve,” Taittinger begins.
“Imagine that one day it may be given to you to stand on this balcony as a tourist, to look once more on these monuments to our joys, our sufferings, and to be able to say, “One day I could have destroyed all this, and I preserved it as a gift for humanity.’ General, is not that worth all a conqueror’s glory?”
The General replied, “You are a good advocate for Pairs. You have done your duty well. And likewise I, as a German general, must do mine.”

History tells us that the General was wise enough to know that by now Hitler was indeed a madman and that the war, with the Soviets now advancing from the east, was all but over and that it would not serve the furture of Germany, whatever that further may now hold, to destroy what the French held so dear. There is more to the story, a series of interventions and seemingly miraculous moments which spurred the Allied forces to march upon the city in the nick of time, but I suggest that you read that story on your own as it makes for fascinating reading.

When the church bells rang out echoing across the city, with the deep baritone bells of Notre Dame leading the way, sounding the joyful news of the liberation of Paris, the General was heard to say, “that today I have heard the bells of the death knell of my own funeral. . .” He had sent the troops out from the city with having detonated only the bombs of one of the train stations.

What is it about our splendors and our glories, those monuments we construct, build, make and craft from generation to generation. . . those tombs and treasures we hold so dear and so ever important? So much so that we feel the urgency and need of being tasked with their care, their maintenance, their upkeep and their eventual preservation?
Is it because we see that these manmade wonders are some of the tangible evidence of the better part of our nature? That despite our ability to destroy, to kill and to promote war. . .deep down we know that we strive for the good, the beautiful and the enduring?

These wonders of ours link us to our past civilizations. These monuments of glory, grandeur and beauty of both joy and sorrow allow us to see from where we have come, and in turn we are afforded the opportunity to show future generations the part of us which is better, kinder, gentler, more humane —that side which chose to give rather than to take?

So on this day, when another has fallen victim to a dark and evil menace spreading outward from the Middle East, I am left with the simple prayer, “Oh Lord, show us the way. . .” 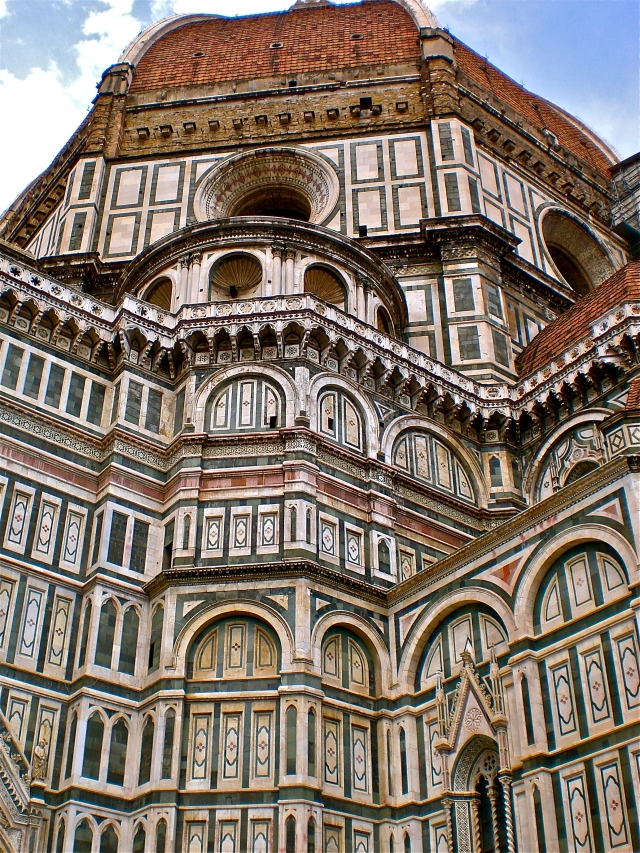 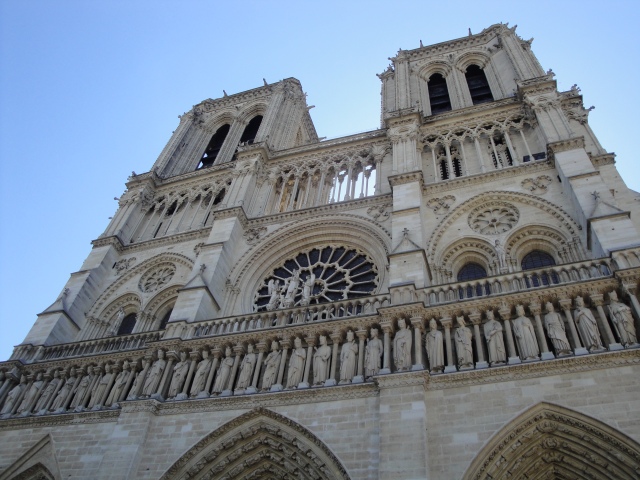 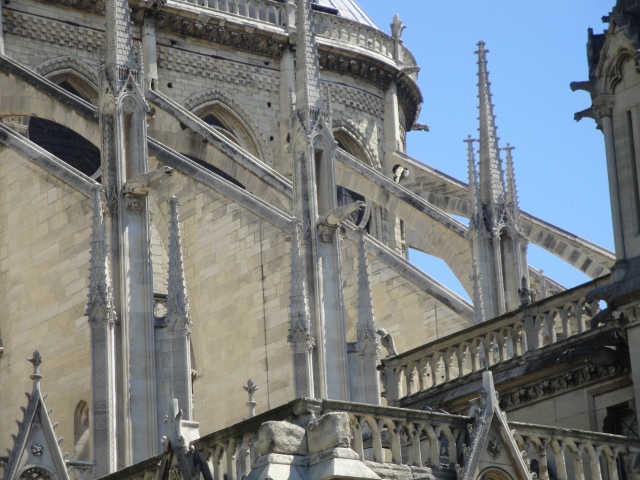 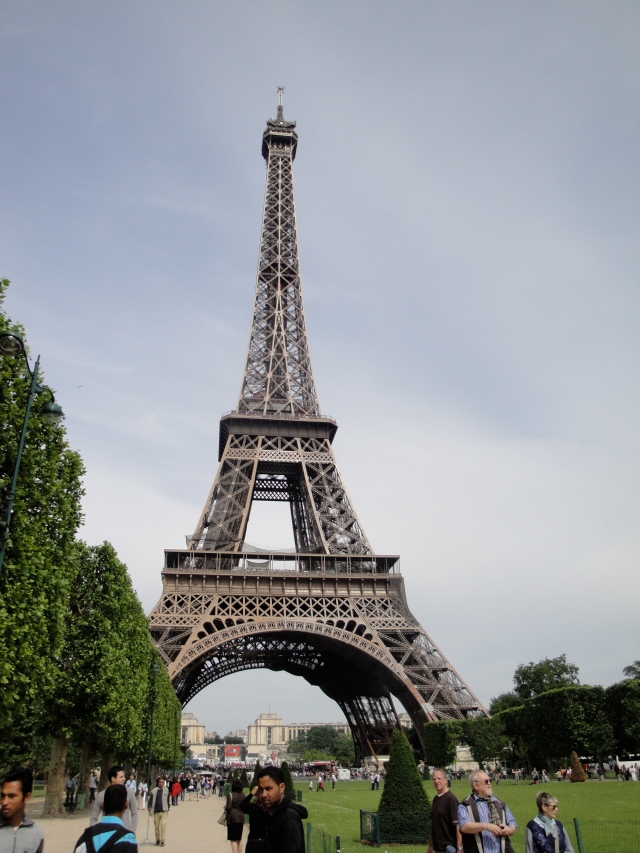 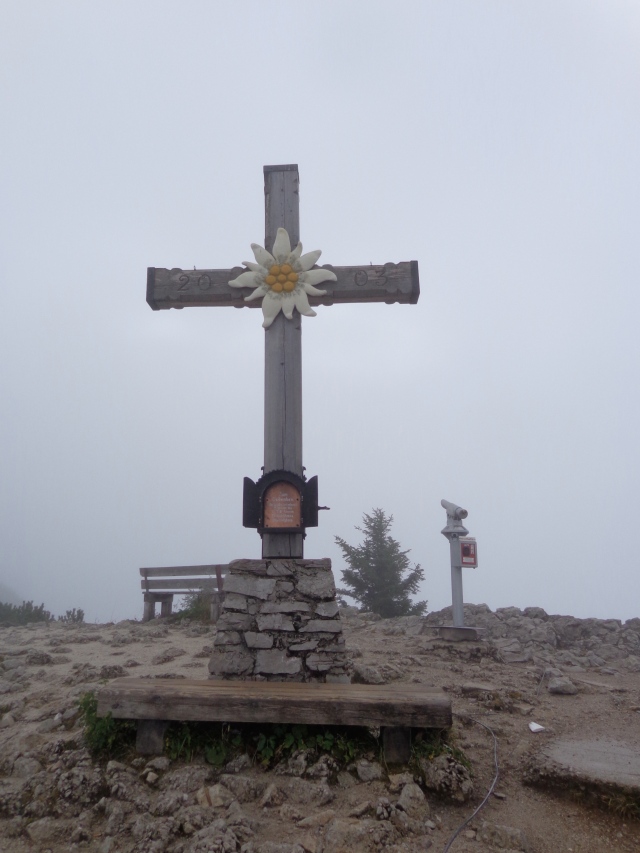 (the cross that sits atop the Eagles Nest or the Berghof overlooking Berchtesgaden, Bavaria which was once Hitler’s private mountain retreat / Julie Cook / 2013) 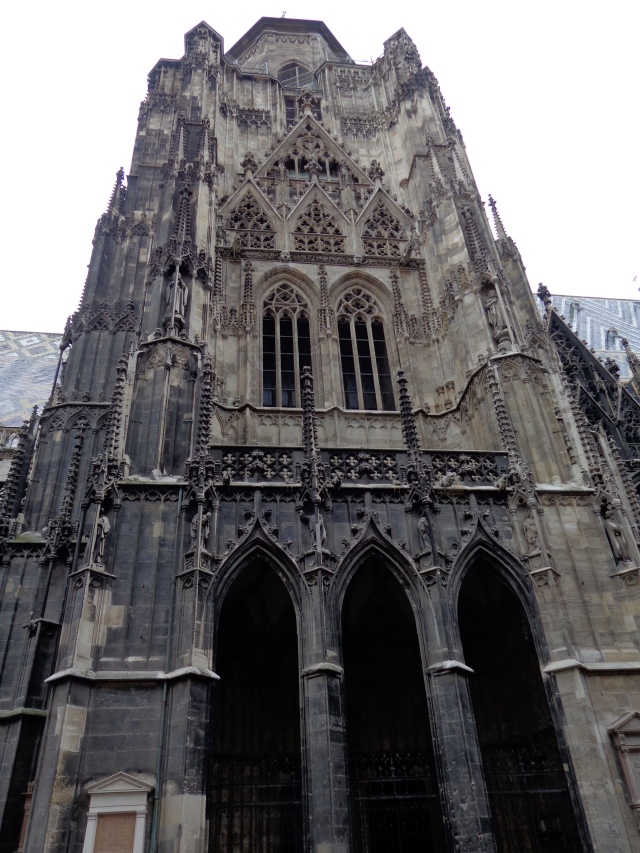 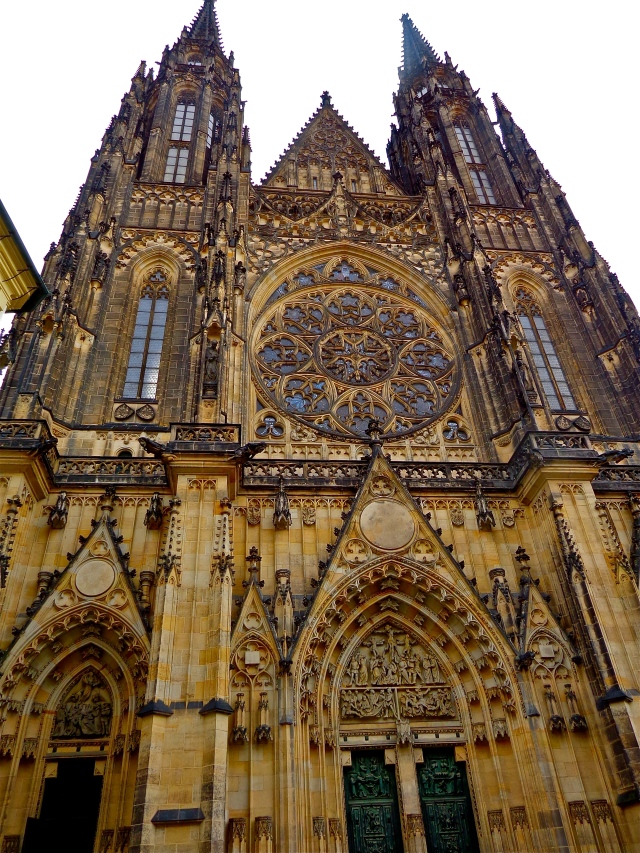 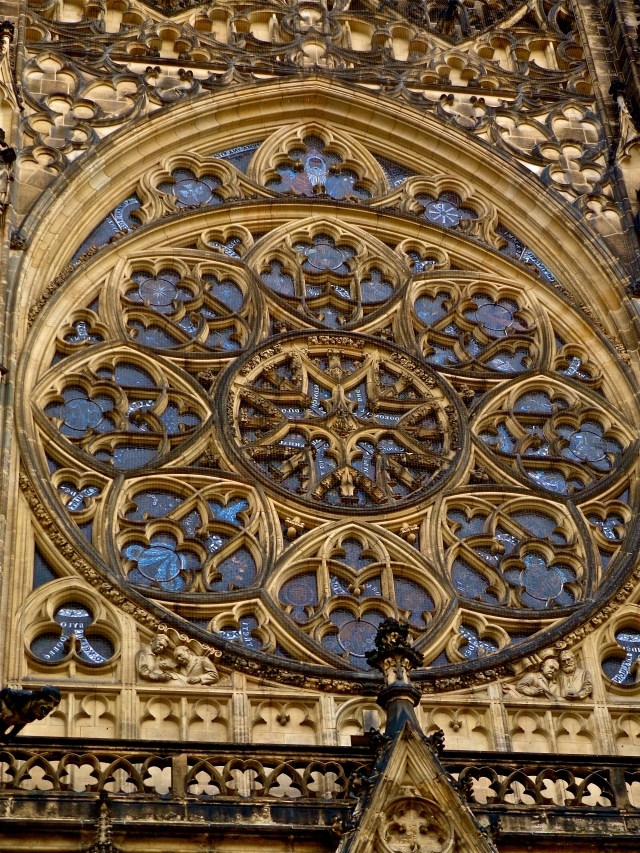 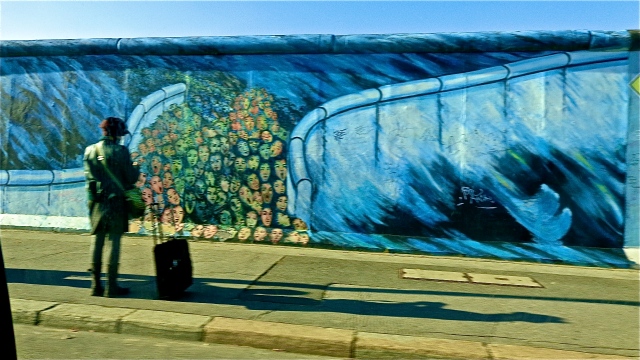 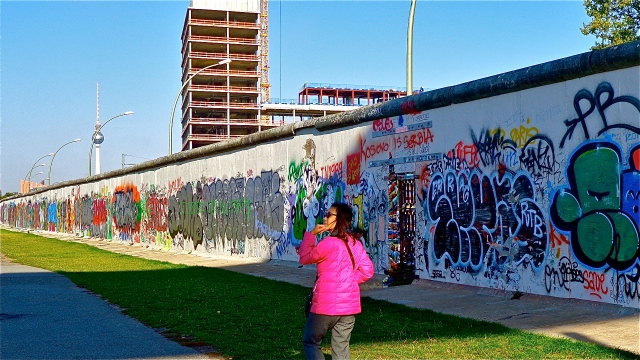 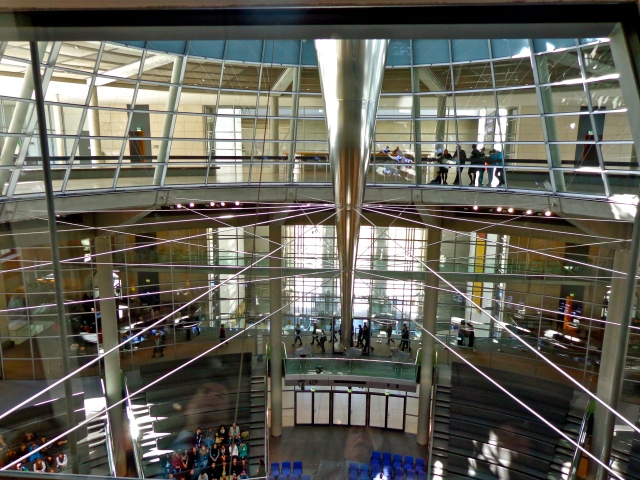 (The interior of the new German Chancellory, the Bundestag / Berlin, Germany / Julie Cook / 2013) 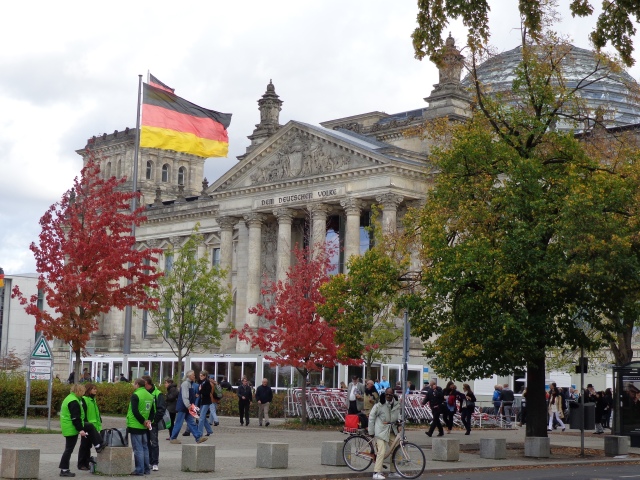