“Jesus, help me to simplify my life by learning what you want me to be,
and becoming that person.”
St. Therese of Lisieux

Here it is the height of the summer despite many school systems already heading back
for the start of the new school year.

Living down South, in a place where summer’s luscious produce is hitting its zenith, despite
the stores beginning to put out their fall and Thanksgiving goods, I happened to notice
an odd occurrence when stopping by the local grocery store.

I ran in the store in order to pick up a few things the other day and grabbed one
of the colorful bell peppers stacked ever so neatly on the grocery store’s produce shelf.

I usually prefer the red, yellow or orange varieties over the innocuous green ones as
they taste no different but add a splash of color to whatever one is preparing.

Once home, as I was putting away the groceries, I pulled out my bell pepper.
I looked at the tag stuck to the pepper, reading to see if my bell pepper came from
either Florida or California…all the while secretly hoping it would read Georgia.
It’s that time of the season you know here in Georgia—when gardens are now fully bearing
their long-anticipated fruits of a farmers labor.

Yet I am well aware that our Nation’s produce belts lie in our more temperate climate states…
States such as California and Florida…for various fruits and vegetables and places like
Nebraska or Iowa for corn.

However, imagine my surprise when I read that my beautiful bright colored pepper hailed from none
of the aforementioned states but was actually born and raised in Holland.

The last place I think of when I think of something like a bell pepper is Holland…as in this
low land, country is known for several other things besides bell peppers.
Beer yes, peppers no.

If I still had a garden, this is the time when my own peppers were coming into their own.
Would it not make more sense to have a pepper from right here in Georgia…
since this is our time of year for the likes of produce such as peppers???

Instead I picked a pepper, not a peck of peppers mind you, that had to actually come to me
via a cargo container…and yet despite an arduous journey from the land of canals and windmills
over the Atlantic Ocean, a beautiful orange pepper arrives at my grocery store…
looking pretty as the day it was most likely plucked.

Makes me wonder as to how this pepper has stood up so well during its travels from Holland
to my fridge here in Georgia.

And so yes, it may not be convenient for me to trek out to the local farmer’s market–
getting grocery items at the grocery store and produce items at the produce market and then
butcher goods from a local butcher (of which we no longer have in our smaller community)
I just might want to rethink my shopping habits as I would prefer a fresh locally grown
pepper as to this lovely trans Atlantic pepper.

And nothing against Holland nor this beautiful pepper…but I do prefer local when I can find it.

There are things that each country does well—think Chocolate form Belgium, Beer and sausages from Germany, olive oil from Italy, Spain and Greece…along with olives…
think wines from France, Italy, Portugal and yes, California…

But when it comes to summer produce…well, I kind of prefer mine to grown a bit closer to home…
because Heavens knows that here in the South, we are in the height of the season…

“However great our efforts, we cannot change ourselves.
Only God can get to the bottom of our defects, and our limitations in the field of love;
only he has sufficient mastery over our hearts for that.
If we realize that we will save ourselves a great deal of discouragement and fruitless struggle.
We do not have to become saints by our own power;
we have to learn how to let God make us into saints.
That does not mean, of course, that we don’t have to make any effort…
We should fight, not to attain holiness as a result of our own efforts,
but to let God act in us without our putting up any resistance against him;
we should fight to open ourselves as fully as possible to his grace, which sanctifies us.”
Fr. Jacques Philippe, p. 14-5
An Excerpt From
In the School of the Holy Spirit

To know your Enemy, you must become your Enemy.”
― Sun Tzu 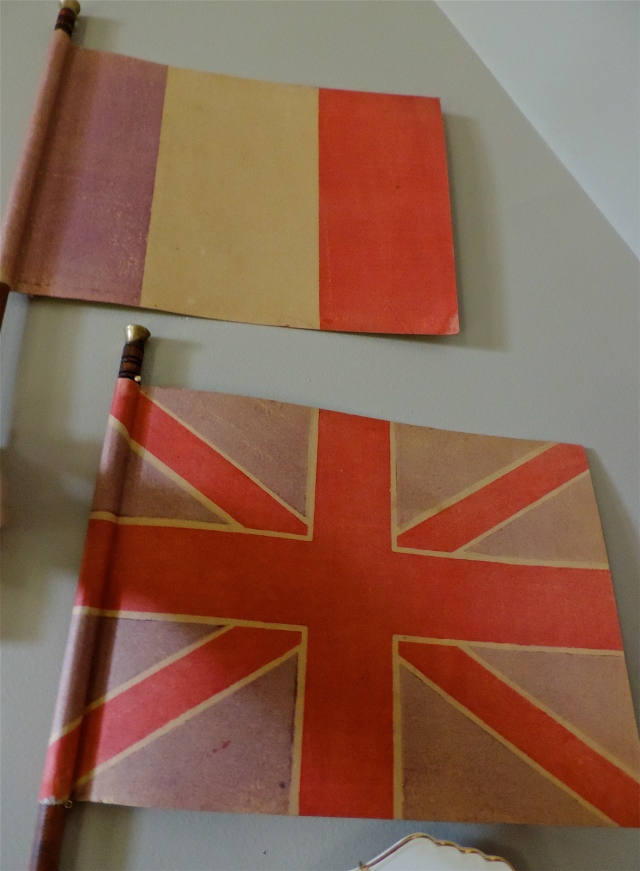 There I was mindlessly staring out the basement window, sweat rolling down my brow into my eyes, giving new meaning to salt solution, Bono blasting out of my iPhone– “I’m not invisible”– when suddenly at 11:00 (as in off to my left oh so slightly) something of a raw sienna tone is indeed no longer invisible.

The enemy has emerged from the thicket, just over the barbed wire fence.
Oh the stealthy one. . .
Grabbing the music blaring iPhone, I try to get a picture while precariously balancing whilst still working the elliptical.

“Back on the ol elliptical eh?” You ask in that condescending tone.
Yes, as a matter of fact, I am—during the two week wedding hiatus, there were miles and miles of brisk heat consumed walking but not the consistent fat burn of my basement nemesis. You saw me in that dress–You and I both know that there is still much work to be done–and oh, by the way, Publix has brought in a new butter.

A new butter” you muse.
“How can there be “new” butter?
Prèsident–a french butter made in Normandy—with real flakes of tasty sea salt—ummmm.
Fleur de sel, the caviar of salt, is only found in the salt flats of Normandy—which has been harvested for centuries.
Chefs love to finish a dish with a light sprinkle of the flour de sel.

“But I thought Normandy was only good for D Day celebrations and that apple brandy of theirs. . .” you ask quizzically.
Ahhh yes. . . Calvados.
Nothing like a sweet potato soufflé spiked with a good dose of Calvados.
But no, they do more than war memorials and apples—they do salt and they do butter.
Does it get any better than that???

Oh dear Lord, the thought of butter has sent me spiraling off track.

So there I was sweating like a pig, watching this 4 legged enemy at the far end of the yard, opposite my garden, aka, the deer salad bowl, advance. I careened my neck out about as far as I could, as my legs in tandem seemed to excelerate, just so I could see a portion of the garden to my extreme right. Was this doe sent in as a distraction while the others made haste to the tender beans?

I continued watching this doe nibbling on the blackberry bush.
And as suddenly as she appeared out of the brush—one blink, or one sweat blob in the ol eye, and she was gone. . .for now. . .

Fast forward to twilight.
We decided to go check the garden after supper.

Just as we stepped out the back door, I heard it.
SHUUU SHUUUU
The unmistakable snorting sound a deer makes as a warning.
As fast as I looked up to scan the area, there they were. . .two white tails hopping and darting
away, back into the dense venation at the edge of the woods.

Oh they are testing me to be sure.
I may need to go cut more Irish Spring.
Maybe another scare crow?
And those deer b gone granules…hummmm
Why do I fret so and work as I do. . .
All for this–the first basket load of goodies.

What’s this you say? Are those two feet adorned by wellies of sorts? Whose feet are those Julie? Are they your feet? Where is that cast thing of yours? Shhhhhhhhhh—don’t tell but I’ve flown the proverbial coup. During my last visit to the orthopedic, I asked him if I had to wear the blasted thing when we went down to Savannah. He told me I was pushing the envelope a bit but he thought that perhaps I could give it a go…just make certain I brought the aircast along for the ride–of which I did.

I walked and I walked and it hurt and it hurt, but not the serious kind of hurt—just the “I’m not use to all this walking sans a cast kind of hurt.” And yes it is still swollen a bit, more so later in the day—kind of like a ping pong ball for an ankle bone—but I’ve got to start somewhere….he also told me that he was cutting me loose and to call if I needed them. Needed them? Heck No!! I’m out of here and out of that blasted aircast!!!!…..free at last, free at last….just keep me level, no running, twisting, jumping, nothing sudden….slow and steady, slowly but surly….and no d@&n ditches!!!!

And lookie at the garden…… 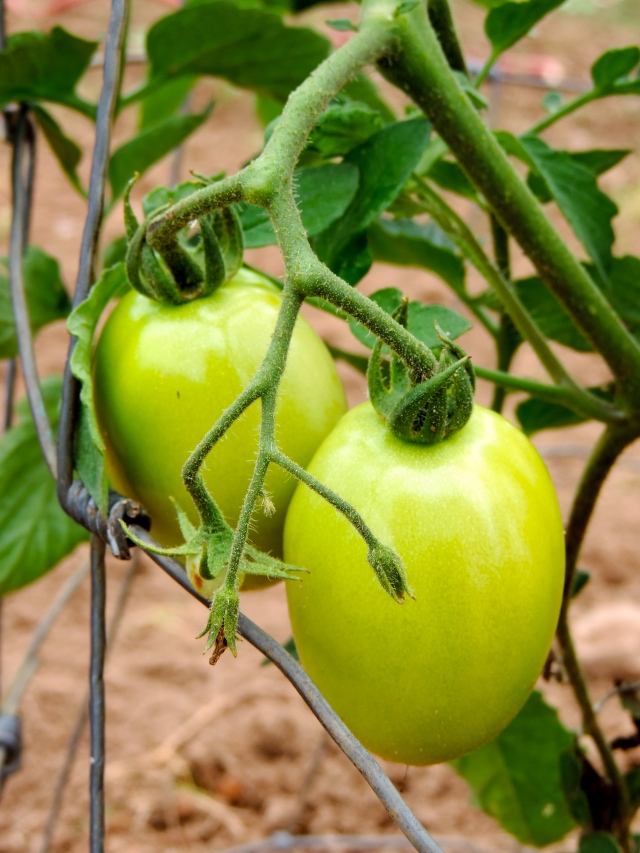 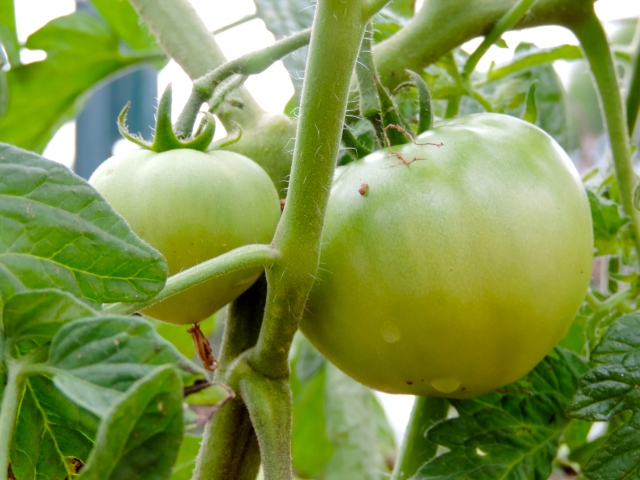 and lookie lookie, someone is starting to “turn” colors…It can’t be too long now……