“Lean on me, when you’re not strong
And I’ll be your friend, I’ll help you carry on.”
Bill Withers

“Conceit may puff a man up, but never prop him up”
John Ruskin quotes 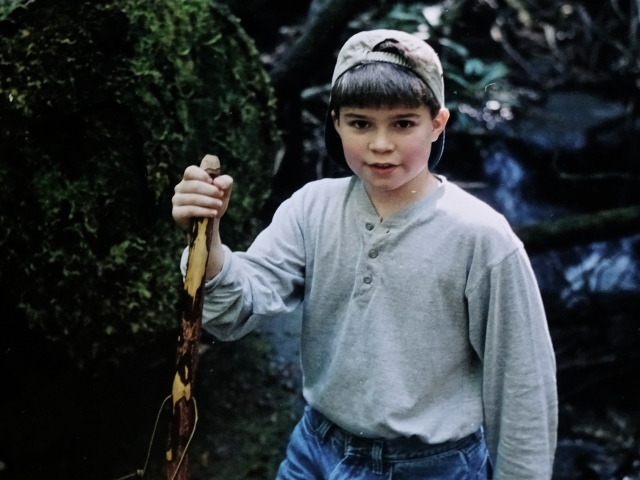 (my son when he was much much younger with the same walking stick on a hike in Cades Cove, TN / Julie Cook)

The above images are photographs featuring a single stick–
yes, you read correctly, a stick—
but this is not just any old stick. . .
This stick is a fine hand carved Tennessee walking stick—
built to aid one when traversing the paths and trails, for this particular stick,
throughout the Blue Ridge Mountains.

And as we see, this particular stick did indeed fulfill its duty for an eager young hiker. . .

Now all this talk of sticks has brought to mind a recent bit of dialog. . .

The other day I received a very kind comment on one of my recent posts from a gentleman in Cameroon.
He noted that in the bio section of my blog it stated that I had opted to retire from teaching as I needed to be free and flexible in order to help take care of my dad who lives in a different city than my own.
I needed to be able to drive over for scheduled appointments to doctors, the bank, etc as well as for those unexpected and unplanned drives when I would, and do, need to drop everything, making the mad 70ish mile dash to Dad’s. . .

This most kind gentleman in his comment equated my being the child who now serves as
a walking stick—being there to offer aid and support to an
aging father along this most latest journey.

His comment or perhaps observation stuck me as deeply profound.

It should be noted however that in certain countries and cultures, other than my own, that it is often considered part and post to offer aid, support and comfort to one’s aging parents—even considered a privilege to tend to the elderly as the elderly are revered and seen as viable and important.

Sadly my observation of life here in the US is in stalk contrast to such as is seems our Nation’s opinion of aging is a bit skewed and warped as we tend to view aging as something tragically bad and something we will fight with our last dime and breath.

We Americans are not very good with this concept of aging as we’ve never been lauded as a country which truly honors it’s aging senior citizens.
We are, are we not, the country of youth and vigor—relishing in the freedom and mobility of perpetual agelessness as we continue searching for the elusive fountain of youth.
We work hard not to age— fighting it tooth and nail.
Those worn out, tired, aging and ill bodies are often seen as a hinderance to our
youth-minded and action packed lives.

But my thoughts today are not so much about aging or America’s view of its elderly but rather of the role of a simple stick, a walking stick. . .

A devise used to aid and assist verses a device meant to act as a mere prop. . .

Ideally life flows from dependence to independence and briefly back to dependence toward the end of a long and well lived life. Yet sadly,for some of us however, life deals a cruel hand or two as we find ourselves at the height of independence suddenly falling rapidly back into a state of dreaded dependence.
Finding ourselves in desperate need of the aid and assistance offered by those walking sticks within our lives.

There are times that it is to a literal stick we turn, but more often than not, it is to the living walking sticks—those who come to our side offering their support– physically, financially, mentally and emotionally aiding us in moving forward.

A walking stick is active whereas a prop, which can indeed be a stationary walking stick, is more static. Props do serve a purpose but they are usually placed, then quickly forgotten. . .that is until they begin to fail and need replacing.

A walking stick however becomes a constant interaction—sometimes silent sometimes not.
A steady companion of sorts—allowing us to move forward, albeit aided and perhaps a bit slowly, but forward none the less–whereas a prop does not afford motion or progress.

Trust in the Lord with all your heart; and don’t lean on your own understanding. In all things acknowledge Him, and He shall direct your way.
Proverbs 3:5-6