“I knew I should be grateful to Mrs Guinea, only I couldn’t feel a thing.
If Mrs Guinea had given me a ticket to Europe, or a round-the-world cruise,
it wouldn’t have made one scrap of difference to me,
because wherever I sat –
on the deck of a ship or a street cafe in Paris or Bangkok –
I would be sitting under the same glass bell jar,
stewing in my own sour air.”
Sylvia Plath, The Bell Jar

“By then I knew that everything good and bad left an emptiness when it stopped.
But if it was bad, the emptiness filled up by itself.
If it was good you could only fill it by finding something better.”
Ernest Hemingway, A Moveable Feast

Sourwood…
any southerner worth their salts knows sourwood…

However you might be asking yourself, what is it about this sourwood
that southerners seem to know….

Well, the simple answer is that sourwood is synonymous with honey.

A seemingly oxymoron of sorts—
that being…how can something known as “sour”wood produce
something as delectably sweet as honey?? 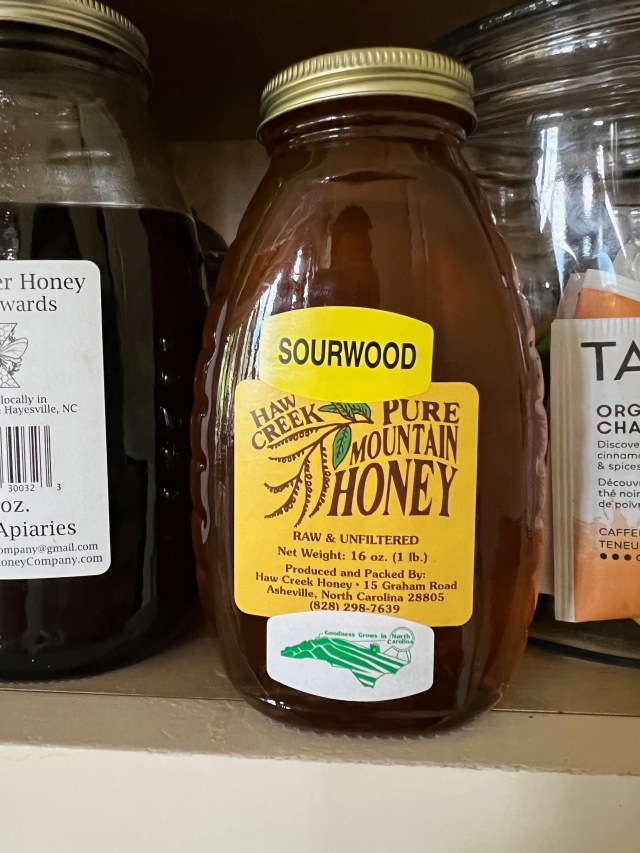 Well maybe the real question might need to start with…
where exactly does this said sourwood honey actually come from?

The source would be the sourwood tree.

The sourwood tree, Oxydendrum arboreum, is also known as
The Lilly of the Valley Tree or the Sorrel tree and according
to NC State’s extension gardener website:
the Sourwood tree is a deciduous small tree that may grow 20 to 30 feet
tall and a trunk 8 to 12 inches in diameter.
It is native to North Carolina and can be found throughout the state,
although more rarely in the low, alluvial plain.
The tree has laurel-like alternate leaves that are finely toothed
and sour to the taste.
The bark is red-brown with deep vertical furrows that separate flat,
pointed ridges.
In mid-summer, small, white, urn-shaped flowers mature on panicles.
The tree produces 5-valved capsules borne on panicles that mature
in the fall and release the very tiny, 2-winged seeds.
Fall foliage is red to reddish-purple.
Terminal inflorescences resemble the elongated, bony fingers of a witch.
This plant blooms in early summer, and blooms up the axis.
Blooms are effective for 3 to 4 weeks. Flowers are fragrant and bloom poorly in the shade. 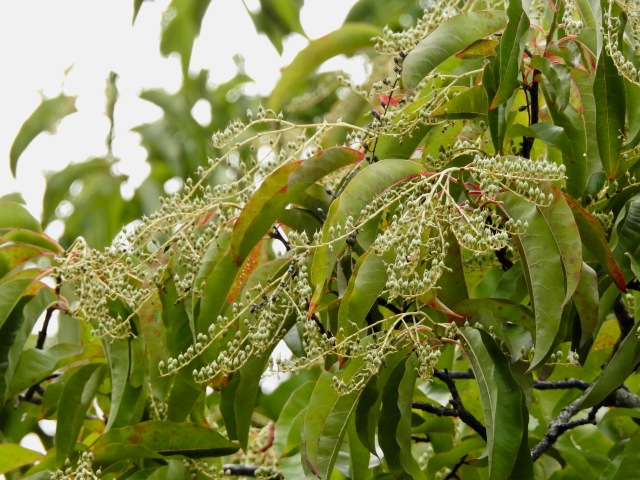 So we have a tree known for being sour, adorned with frilly whispy flowers,
that produces a very unique tasting honey…

According to The Asheville Beecharmer Company:
Sourwood honey is consistently one of the most sought after honeys around the world,
and for good reason. Sourwood honey has a beautiful amber color and bold,
yet balanced, flavor: buttery sweet with rounded caramel notes on the back end.

Sourwood honey is specific to the United States since sourwood trees
only grow within our eastern mountain corridors.
The top sourwood honey producers, however, come from the southern Appalachian
mountain regions of western North Carolina, eastern Tennessee, and northern Georgia.

Sourwood honey is created when honey bees collect pollen and nectar
from sourwood tree flowers.
Due to the density of sourwood trees in the southern mountains,
honey bees can feed almost exclusively from their flowers during peak season,
which results in pure monofloral honey

So ‘sour’wood seems to magically transform into a sweet dark smokey honey—
an amazing mix that only a honey bee seems to innately understand….
And that of the one Great Creator.

Sounds a lot like my life as of late.
Lots of sour, laced with a little sweet and yet specific to a particular place.

Sometimes life is simply too sour isn’t it?
Often bitter…leaving a near caustic taste upon one’s tongue.

And yet magically, or perhaps more miraculously, there comes along a small
something that takes that sour, turning it into something new,
something different and yes, even something even sweet.

Ode to the lessons from a sour tree and a humble bee.

Turn away from evil and do good; seek peace and pursue it.
Psalm 34:14