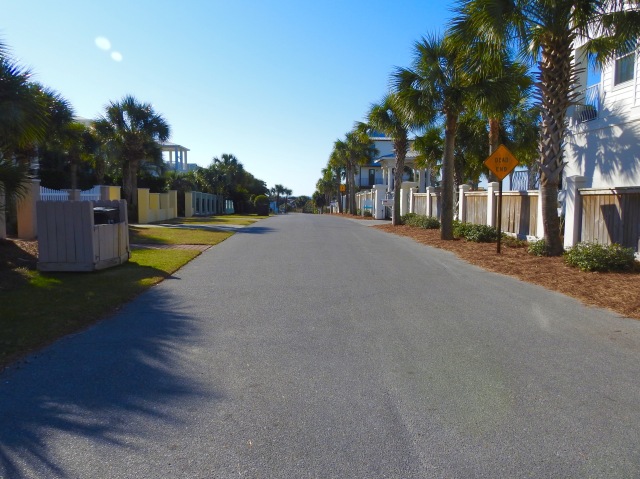 It was said that at one point in the history of time that all roads lead to Rome.
More accurately that should have stated that all roads radiated out and away from Rome.
Such being that if one found themselves heading back to the city,
one could have said that any road would get them there.

Rome was the epicenter of “modern” civilization and the zenith of all that was
during the height of its day.
It only made sense that an empire as mighty as Rome would build a network of roads
leading out of the city–in turn, connecting Rome to and with other various places of
necessity and importance.

The picture I’ve thrown in today was taken during a recent morning walk while in Florida.
It’s a shot of a small side road that apparently is a dead end…
Just looking at the road one might not be able to see that the little road is indeed
a dead end but the sign on the right of the road is the first clue.

The sign indicating that there is no way for a car to circle out or around or on
to someplace else.
The road simply stops.

The road stops at a small walkover bridge. Thus that being the second clue…
the pavement ends.
That’s a pretty good clue as to a dead end—no more pavement, no more road.
The pavement ran out directly at a small wooden bridge.
There was a little patch of “wetlands” and a dune that the bridge skirted over…
leading those on foot over the small pond area and the dune–out and over to the beach
and eventually to the ocean.
So, in essence, the road basically stops at the sea…or actually at the beach in front
of the ocean.

No going to Rome via this little road…and no going anywhere really but to a few houses
scattered about.

And speaking of home, I am back…at home that is.
As my aunt would often say, it was a “quick and dirty” sort of trip.

Not that I exactly ever really ‘got’ what she would mean by that little euphemism of hers
but I assume it was just her odd way saying quick and easy…, and we’ll leave it at that.

After taking a myriad of roads down and a multitude of paths back to get home.
As there is no easy direct route— instead of there is a weaving in and out from
significant to minor roads…
all in hopes of finding the quickest, easiest and least congestive route home.
A direct route is not to be had, and if it were, it would be so busy,
we’d be in search again for some other direction.
Because that’s what we do as humans—
We look for the easiest and quickest routes to our destinations.

I use to pour over maps.
You may remember those now long antiquated folding road maps you could never
fold back to their original folds…

I’d spread out a map and with a trusty highlighter in hand, highlighting the passage of
least resistance…or even a passage of the most scenery and quietude…
just all depended on the urgency of the travel.

Nowadays, I try to input a point of destination, and in turn,
I depend on the car’s GPS or that of the phone’s to weave me in and out of the
current life’s journeys.
Yet I’ve gotten where I don’t exactly trust either the car or the phone with directions
anywhere anymore as we, meaning me, my car and my phone, are not always on the same page.

So whereas maps, GPS, coordinates, addresses are all great and grand, I find that a
good dose of intuition is still a vital component when traveling.
Knowing how to use a compass and knowing the position of the sun is also still
extremely important…or so says my husband the boy scout.

So if we worry, bother and fret about getting from point A to point B in a relatively quick,
easy and safe fashion–
why don’t we put in the same amount of effort or concern when it comes to living our lives.

Are we not concerned about where this thing called life is taking us?
And as to how we will get to that final point of destination…?

If we happen to be Believers, then we pretty much keep our eyes focused on being Heaven bound.
Right?
And in turn, we pretty much know the steps to getting there.
Right?

But what of the countless others out there who don’t consider themselves Believers or believe
in Heaven…what then…what in the heck then do you think this whole life’s journey
has been all about???
All for naught??

So no, not all roads will lead you Home.
Some are simply dead ends.

First, you’ll need to figure out what exactly is Home and as to where it just might
happen to be…
Next, you’ll have to figure out how you’re going to be getting there.
Waze?
GPS?
Mapquest?

There is only one roadmap and it was written about 2000 years ago…
It’s pretty precise, specific and never needs recalculating.

It still likes to be opened, spread out on a table and highlighted…just saying

The steps of a man are established by the Lord, when he delights in his way;
though he fall, he shall not be cast headlong, for the Lord upholds his hand.
Psalm 37:23-24