“Love is an endless mystery, because there is no reasonable cause that could explain it.”
Rabindranath Tagore

“A sculptor who wishes to carve a figure out of a block uses his chisel,
first cutting away great chunks of marble, then smaller pieces,
until he finally reaches a point where only a brush of hand is needed
to reveal the figure. In the same way, the soul has to undergo
tremendous mortifications at first, and then more refined detachments,
until finally its Divine image is revealed.
Because mortification is recognized as a practice of death,
there is fittingly inscribed on the tomb of Duns Scotus**, Bis Mortus; Semel Sepultus
(twice died, but buried only once).
When we die to something, something comes alive within us.
If we die to self, charity comes alive;
if we die to pride, service comes alive;
if we die to lust, reverence for personality comes alive;
if we die to anger, love comes alive.”
Fulton J. Sheen, p. 219
An Excerpt From
Peace of Soul
(**John Duns OFM, commonly called Duns Scotus, was a Scottish Catholic priest
and Franciscan friar, university professor, philosopher, and theologian.
He is one of the three most important philosopher-theologians of
Western Europe in the High Middle Ages, together with
Thomas Aquinas and William of Ockham. Wikipedia)

So the other day I posted one of my more short and sweet offerings…
When time is scarce, I rely on a good picture and a couple,
of what I think to be, pointed quotes.
Most often the quotes offered are by the Saints, Christian theologians,
Christian authors and or Christian mystics.

And so it was on a recent day when I posted a quote by C. S. Lewis:
“In the old days, when there was less education and discussion,
perhaps it was possible to get on with a very few simple ideas about God.
But it is not so now. Everyone reads, everyone hears things discussed.
Consequently, if you do not listen to Theology,
that will not mean that you have no ideas about God.
It will mean that you have a lot of wrong ones—bad,
muddled, out-of-date ideas. For a great many of the ideas about God
which are trotted out as novelties today are simply
the ones which real Theologians tried centuries ago and rejected.”
C. S. Lewis, p. 155
An Excerpt From
Mere Christianity

“In the old days, when there was less education and discussion,”

This was true in regards to both theological and knowledge of everything
but I believe that is the only part the great writer Lewis got
right in this quote.

Theology has not changed, the stories and traditions are basically
exactly the same today but likely more complicated than when they
were created but the general knowledge of our world has
increased dramatically.

We have the massive advancement in both scientific knowledge
and increased educational opportunities that have accumulated mostly
over the last two hundred years, this has cost all religions dearly
in a decline of power especially in first world industrialised countries.

As there is now more freedom of thought there are answers
that explain what we experience in the light of reality without
any supernatural input.

Well, I’ve not had a chance to respond to this particular commenter but
thought I could maybe take a little time now in order to do so…

The picture above is a marble statue carved using the famed Carrara marble
of Carrara, Italy. (https://en.wikipedia.org/wiki/Carrara_marble)

The statue was carved by the famed Italian artist Michelangelo…
a statue of Moses that was to adorn the one-day tomb of Pope Julius II.

Pope Julius and Michelangelo had quite the love-hate relationship.
It was this same Pope that sent his guards to bring back the
run-away artist who tried to skip out on his Sistine Chapel project…
but I digress.

Isn’t this just an amazing piece of craftsmanship?
Do you see the veins and tendons in the muscular arm of Moses?

When I was in Girl Scouts, we were given a bar of soap and were to use our
trusty Girl Scout knife in order to carve something out of the soap.

Despite my grandiose hopes of carving out a bear, I think I managed to
have a whittled pile of soap shavings.

So to be able to see something in a massive chunk of rock and to then,
with only hands, hammer and chisel–with no modern electric or technological
assistance in order to bring forth “life” is, to me, simply amazing.

It is a gift.
Not a rote learned skill…
Now whereas it does indeed take skill to be such a craftsman,
it also takes much more.
It takes vision…seeing that which lies within…
And it also takes something that borders upon the mystical.

Life breathed into a handful of dust….

So our friend’s comment today speaks of both knowledge and understanding.
Noting that each one has more or less come steamrolling in within the
last 200 some odd years…but I dare say it all really took off during
the day’s of Michelangelo…the age of the Renaissance…
and by gosh, it hasn’t dared stop to look back.
Think the Age of Reason…the Age of Enlightenment…
The Industrial Revolution…Post Modernism, Post Christianity…

Whereas we greatly pride our 21st century selves on our breadth,
depth and scope of knowledge…there are, contrary to popular belief,
a few truths that remain…despite man’s dire
attempts to counter it all with his / her hubris and arrogance.

Yet, despite the argument that we are so advanced and now know
all there is to know, there actually remain certain truths…

Take Biology for instance…
I would think Biology is one said truth.

And yet, therein lies the mystery.

Sure there are miscues and misfires.

There are anomalies.
There are exceptions
There are mysteries.

But that does not diminish the truth.

Thought does not necessarily equate to reality…does it?

This particular individual speaks of the supernatural no longer being necessary…
but if it is “super” as well as natural…then is that not a mystery in itself?
That which remains rooted in that of the unknown?

And so as I consider today’s quote by Archbishop Fulton Sheen,
I marvel.
Our lives are not so readily written off as compartmentalized
reason now are they? 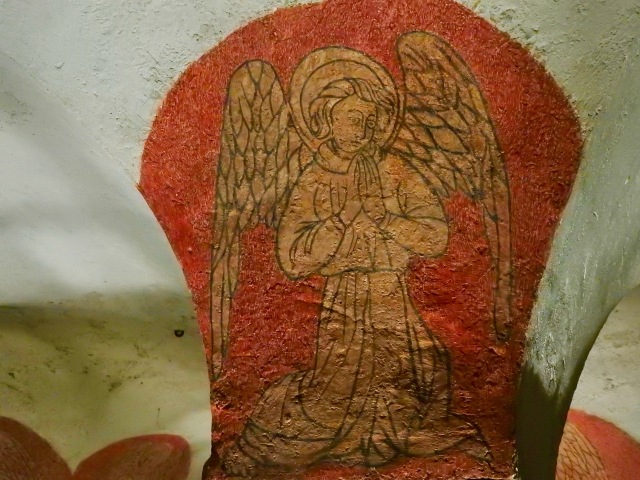 (detail painting on a column within Cathedral of Our Lady of Bayeux, France / Julie Cook/ 2018)

Yesterday I offered a few quotes.

Life is still hectic as I continue playing catch-up.

So, therefore, spending the proper amount of time and energy necessary for more
meatier posts continue to be proving elusive.
And so I offer thoughts and observations that I find to be heavenly and even Grace
filled in their offerings…

Yesterday I had found some rather interesting quotes…quotes regarding both
science and Christian faith…
as there seems to always be some sort of friction between the two.

And probably the most famous clash was between Galileo and the Catholic Chruch.

We all know that Galileo actually got had gotten it right…
he had realized that the planets revolved around the sun rather than the sun revolving
around the planets…with the particular planet being that of the earth…
as the earth was and continues to be, the seemingly center of all of our little universe.

Yet his thoughts, observations, and theories challenged a church that was unsure
and even afraid…as the hierarchy was unwilling to think outside of the box.
And so Galileo, who was a devout Catholic and whose daughter was actually a nun,
was in a bit of a pickle.

The Chruch demanded Galileo recant his conclusion…or if he chose not to,
he would be imprisoned as well as excommunicated.

History affords us the answer to this quandary.
He was imprisoned, living his life under house arrest and was indeed excommunicated
from the Church he respected and loved.

Letters that were written from a father, who was currently under house arrest
by the Chruch, written to his daughter who was living her life for that very Chruch.

It wasn’t until 1992 that the Chruch actually owned up to the fact that they, the Chruch
as a whole, was wrong in their treatment of Galileo.

More than 350 years after the Roman Catholic Church condemned Galileo,
Pope John Paul II is poised to rectify one of the Church’s most infamous wrongs —
the persecution of the Italian astronomer and physicist for proving the
Earth moves around the Sun.

With a formal statement at the Pontifical Academy of Sciences on Saturday,
Vatican officials said the Pope will formally close a 13-year investigation into
the Church’s condemnation of Galileo in 1633.
The condemnation, which forced the astronomer and physicist to recant his discoveries,
led to Galileo’s house arrest for eight years before his death in 1642 at the age of 77.
(New York Times)

Pope John Paul II, who had one of several degrees in Philosophy, and who actually delved
deeply into the study of both science and philosophy, understood better than most,
the relationship between Science and the Church.
“Karol Wojtyla’s second doctoral dissertation,
submitted in 1953 to the Jagiellonian University in Kraków, Poland,
concerned the thought of Max Scheler (1874-1928)
a leading exponent of the philosophical school known as phenomenology.
Phenomenology, together with the more conventional Aristotelian-Thomistic
tradition, proved to be the two great influences on the philosophical development
of Karol Wojtyla.
From the latter, he learned to be a philosophical realist.
From the former, he learned to develop of rich sense of the moral life of the human person.
It is worth considering these two influences in a little detail.
(Encyclopedia Britannica)

And so thus we know that Pope John Paul II understood the importance of science,
and that he worked to rewrite the previous wrong with his “pardon” of Galileo.

I find the quotes by renowned scientists regarding their studies along with their deep
faith to be so refreshingly uplifting.

There are so many who are rabidly anti-church and who claim that atheists
cannot abide by the Chruch’s lack of acceptance of science…
and yet we have so many notable scientists who are deeply committed Christians…
so perhaps that arugument simply doesn’t hold water.

I find much of their arguments actually mute.

Thus after reading my post yesterday, our dear freind Oneta offered such a wonderful
reflection—a reflection that actually reminded me of something Albert Einstein had once
noted about his belief in God…

If the universe were a product of chance,
we would not expect to find such order and intelligibility and laws.
We would find chaos. Anyone who has studied the second law of thermodynamics
knows that any system, like the molecules of air and gases in this room,
by their natural state are in the maximum of disorder.
The molecules don’t line themselves up; they’re just bouncing around.
That’s what we would expect to find in the whole universe—absolute chaos.
This led Albert Einstein to make this famous statement:
‘The most incomprehensible thing about the universe is that it’s comprehensible.’
Fr. John Flader
from God and Science