So the religious soul finds in the heart of Jesus a secure refuge against
the wiles and attacks of Satan, and a delightful retreat.
But we must not rest merely at the entrance to the hole in the rock,
we must penetrate its depths. At the mouth of the deep hollow, at the mouth
of the wound in his side we shall, indeed, find the precious blood which
has redeemed us.
This blood pleads for us and demands mercy for us.
But the religious soul must not stay at the entrance.
When she has heard, and understood, the voice of the divine blood,
she must hasten to the very source from which it springs,
into the very innermost sanctuary of the heart of Jesus.
There she will find light, peace, and ineffable consolations.
St. Anthony of Padua

(a mysterious painting of St. Anthony and the Christ child)

The saints pick us, we don’t pick them…
Or so that’s what they say.

But firstly, let’s remember, this is going to be a story about a painting…
nothing more, nothing less…

For starters, I’ve stated this before…I am not a Catholic—rather I was raised in the
fold of the Episcopal Chruch…that of the Anglican Communion.

I am however familiar with the family of Saints.
A seemingly Catholic notion.
Yet also very Anglican…

Also, I love my traditional Anglican hymns…
One little hymn, in particular, I Sing a Song of the Saints of God
I loved singing that hymn when I was a little girl attending children’s chapel.

Saints, in my youthful mind, were individuals who loomed large in our Christian Faith.
Brave, and even stoically defiant, in the face of persecution.
Some had been ardent unbelievers or dastardly sinners who had, for whatever reason,
come face to face with the God of all Creation and in turn, fell into His redeeming arms,
never looking back but rather becoming ardent defenders of the faith.

It was always the 3rd stanza of the hymn that offered me a sense of hopefulness that I too
could one day be counted among that same fold of brave Christian individuals.

they lived not only in ages past;
there are hundreds of thousands still;
the world is bright with the joyous saints
who love to do Jesus’ will.
You can meet them in school, or in lanes, or at sea,
in church, or in trains, or in shops, or at tea;
for the saints of God are just folk like me,
and I mean to be one too.

I also know that when one is confirmed within the Catholic Chruch,
they are encouraged to choose a patron saint.
A heavenly individual who will walk alongside them as they navigate the world…
all the while the saint helps to provide inspiration along with a more spiritual focus.

The old saying goes, ‘you don’t pick the saint, the saint picks you.’

And I must admit, I actually agree.

We Protestants haven’t always quite understood the relationship our Catholic kin
have had with the Saints, but I’m one who has always appreciated that little relationship.
And that’s in part due to my Anglican upbringing.
As well as spending years in college studying religious Renaissance Art.

So no, it’s not an attempt at replacing Jesus as the focus of our prayers, praise,
and adoration but rather it’s more like having a few more folks in one’s corner
it’s just that those folks are a bit more heavenly than earthly.

Think of it like having a close friend who joins you in prayer and
who walks along by your side…it’s just that they’re there in spirit rather than
in the flesh.

The saint in question is Saint Anthony of Padua, otherwise known as
Santo Antonio di Padova.

He is known as the patron saint of lost things.

But again, this is not necessarily to be a biographical post, just a post
about a painting…

I have had a long connection with St Anthony—one I’ve written about before.
But this particular tale is unlike our other run-ins and lingering relationship.

So just know, Santo Antonio and I have a history.
But this story isn’t about that story, but rather about a painting.

Several months ago, I took a couple of my grandmother’s old lamps over to Atlanta
in order to have then rewired.

They are lovely antique lamps that have just sat, never being used due to ancient
and most dangerous wiring.
My grandfather, who was an electrical engineer would, as a hobby, often turn the
antiques figurines or urns that my grandmother would bring home into lamps…
and so some of these lamps haven’t been updated in decades.
So I figured it was high time I got them up to speed so I could actually use them.

A friend of mine recommended a nice little lamp shop located over in Midtown…
and it just so happened that the shop also had a hodgepodge smattering of antiques.

I made several trips back and forth as I also decided that I needed to update a few lampshades.
Over the course of my visits, the owners and I struck up a nice little friendship.

We knew mutual old Atlanta stories and they knew some customers from Carrollton who
I knew.
Life can be delightfully small like that.

During one of my many trips over, one day my eye suddenly gravitated to an old beat-up
unframed oil painting perched all alone over in a forgotten corner.

The painting was ripped, chipped and cracking as the canvas was coming
untacked from the wooden base frame.
It was old, it was sad and it was unloved…
and it oddly drew me in.

Or rather it was the subject matter which immediately drew me in.

I asked the owners if they would consider selling the picture.

They said yes and it was actually a very affordable penance of a price for such an old painting.

Next they proceeded to tell me the story of how they came about the painting.

It seems that back in the early 1920s, The Vatican reached out to an Abbey in Michigan
about sending them approximately 50 paintings.
Why I’m not certain, but I do know that it was not uncommon for the Vatican to
‘lighten the load’ so the speak by gifting various abbeys, monasteries and churches
with some of their burgeoning collection of artwork.

The abbey kept the paintings until recently.

A nun from the abbey, out of the blue, reached out to these owners…
as it seems that one of the owners has a proclivity for antique
paintings and is known for such.

The nun explained how the abbey had gotten the paintings
but for a reason I never caught in this convoluted tale, asked if they’d be interested in
buying any of the paintings.

When they hung up the phone with the nun, they immediately rented a U-haul and drove
all night to Michigan.

They bought all 50 paintings and brought them back to Atlanta.

Many of the paintings have in turn been sold or were simply kept.

All but the one painting that had caught my eye—sadly because it
was most likely the one in the worst shape.

But that didn’t matter to me.
The painting called out to me and I couldn’t resist.

What I was planning on doing with a dilapidated,
torn old painting was beyond my husband’s soul…
but it mattered not, the painting had called to me. 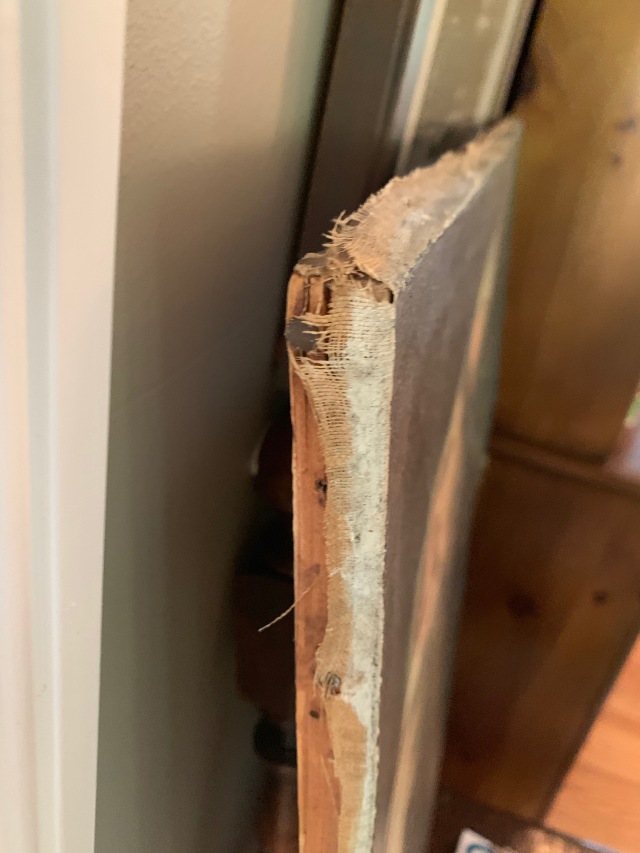 A few weeks after bringing home my new old broken treasure,
my husband and I ventured down to a small town outside of
Callaway Gardens to spend an afternoon roaming around and having lunch.

I wandered into an antique shop and started looking at a couple of old frames that were for sale.
The owner asked what I had in mind for the frame.
That was when I began to share my tale about my painting and how I was looking for a frame.

She asked if I would consider bringing her the painting as she had a friend who actually
did restoration work on old paintings.

I agreed.
I was curious as to its background and there was just something about the painting
that seemed to plead with me to please bring it back to life.

The short of this long story…we finally picked up the painting today…
It is estimated to be almost 200 years old.
It has been lovingly repaired, cleaned, re-stretched
and now rests in a pretty new frame…nearly 3 months after
I first saw it sitting alone in a corner.

So tomorrow, the painting of Santo Antonio will finally be hung up, surrounded by things
received and gathered during a lifetime of running into St Anthony.

“I have learned on this journey that we can’t only study the saints who have personalities
or interests exactly like our own.
Our friends, including our Heavenly ones, should challenge us and help us to grow.
In seeing what we lack in our own lives, we are able to forge ahead and grow.
If we never seek out our defects or weaknesses, then we can never begin to overcome them.
So be open to saints who choose you and want to befriend you.
It is God moving in your life through His saints.
There is something you need to learn or I need to learn.
Let us be thankful for the saints who choose us through no merit of our own.
All you holy men and women, ora pro nobis.”
Constance T.Hull
Catholic Exchange