Though Moses was not permitted to enter the land of promise,
he was vouchsafed a sight of it from a distance.
We too, though as yet we are not admitted to heavenly glory,
yet are given to see much, in preparation for seeing more.
St. John Henry Newman
from an Advent sermon in Parochial and Plain Sermons 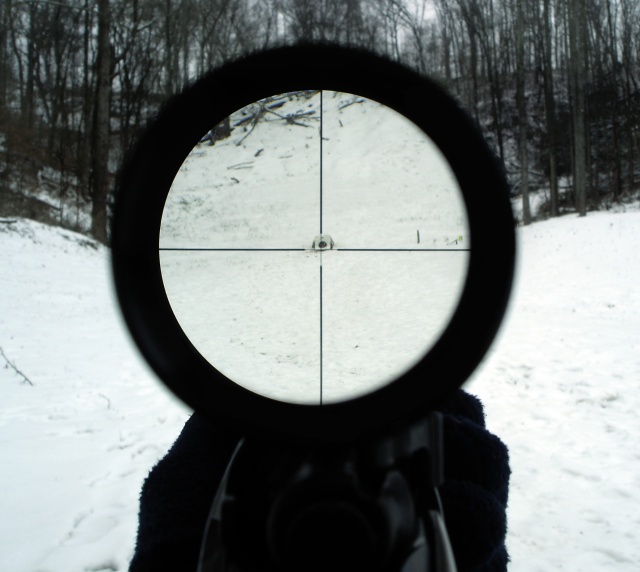 When I was in college, I spent my summers working at a girl’s Christian summer camp.
I was the riflery director.
It was a position I just kind of fell into…but that’s another story for another day.

At the start of each new summer, just days prior to the campers arriving,
I would be busy spending those days cleaning, testing and sighting in the rifles.
I oiled each rifle, tested each one for proper firing, and zeroed in the sights as best
I could with pre-manufactured sights.

I needed to make certain that each rifle was in working order for my campers.

These guns were traditonal bolt action .22 calibers… there were no fancy scopes…
merely the metal notch, aka sight, manufactured on the gun…
more or less what is known as an open sight gun.

The rifles usually took a beating each summer…they’d get dropped, whacked by accident
and stacked up inside a closet in the gym at the end of each day.
After being stored away all winter, I had to make certain the barrels were still straight
and the sights were not bent or, in some cases, broken off.

To shoot these old school rifles, one would have to close one eye while using the
one open eye to look down along the top of the barrel,
down past a small metal V or notch located up on the barrel.
You’d have to line up the notch on the rifle with the bullseye on the target that was placed
about 75 yards away–then take in a deep breath, holding it in while gently
pulling the trigger.

The girls would start out in what is known as a prone firing position—
meaning they were resting flat on their stomachs, perched on a mat.
Next, they would attempt a kneeling position and eventually a standing postion.
They usually preferred the prone postion because they didn’t have to worry about holding
up the gun while attempting to keep it steady when trying to aim.

Target shooting is a disciplined activity.
It’s about learning how to steady one’s body and breathing while focusing one’s vision.

And it is that focusing of one’s vision that brings my thoughts to this time of year…
that being Advent.
A word that means coming…
and if something is coming, we usually need to be looking for it.

And so I was reminded about my “shooting” days when reading St Newman’s quote today–
St. Newman speaks of the glimpses God affords us…glimpses require us to
be steady and watchful while focusing on what is to be seen.
As in zooming in and seeing something through a sight.
We have to steady ourselves in order to see it more clearly.

At Advent, God grants us this glimpse.
A glimpe of that which is coming…coming our way.
And so this is a time of preparation…the glimpse is given and now
it is our chore to ready ourselves for what awaits us.

The glimpse tells us that there is something so much more than just a mere
passing glance…we know that we need to be ready, steady and focused.

Year passes after year silently, Christ’s coming is ever nearer than it was.
O that, as He comes nearer earth, we may approach nearer heaven!”
St John Henry Newman