You’ll get mixed up, of course,
as you already know.
You’ll get mixed up
with many strange birds as you go.
So be sure when you step.
Step with care and great tact
and remember that Life’s
a Great Balancing Act.
Just never forget to be dexterous and deft.
And never mix up your right foot with your left.
Dr. Seuss 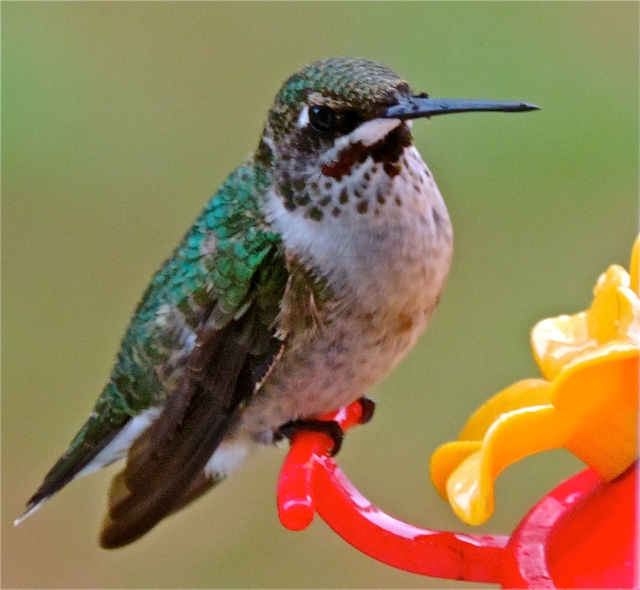 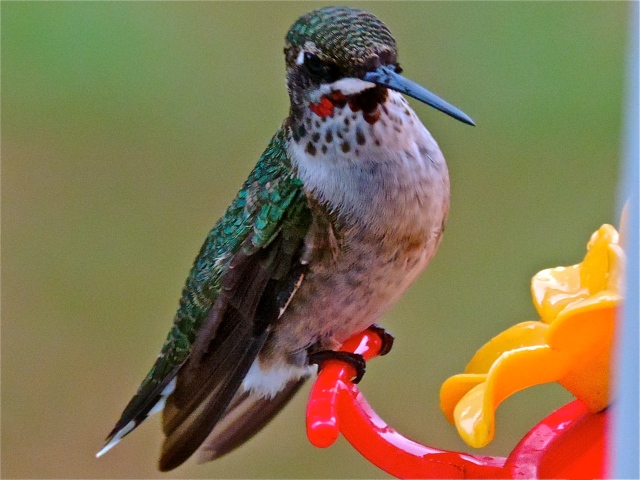 Thunderstorms still linger
Temps are in the mid to upper 80’s
Leaves are slightly changing but mostly falling off
Humidity is high.
I’m wearing a T shirt, shorts and sandals.
And there is still a hummingbird hanging out in the yard.
Hanging out like its got no place to go.
Like its got nothing to do.
Like its got no “family” to tend to.

Out of the regular 4 to 5 hummingbirds that annually call our yard home between April and, well, up until about two weeks ago, all birds have flown the proverbial coop except for this lone little girl.

Ruby throated Hummingbirds are suppose to head south this time of year.
Yes, I realize that this is actually the South, but I’m talking way south—as in across the Gulf of Mexico on over to the lower Yucatan Peninsula.

These tiny birds are known to fly over that vast expanse of ocean known as the Gulf—500 miles worth over nothing but water, all without stopping—in order to “winter” in a more tropical climate.

Somehow, I don’t know how, but I fear this little girl must have missed the final all call when her clan decided “it was time.”
Perhaps she was out front checking the freshly planted mums and snapdragons when her family was out back by the feeders packing their bags.
Maybe she was still asleep and missed the wake up call on the morning of the “exodus”
Maybe she thinks it’s still Summer as the weather is anything but changing to cooler times.

Whatever the reason she lags behind. . .
I hope she will soon figure out she must make haste to a place which will offer her a mild and temperate climate.

“My little sisters the birds, ye owe much to God, your Creator, and ye ought to sing his praise at all times and in all places, because he has given you liberty to fly about into all places; and though ye neither spin nor sew, he has given you a twofold and a threefold clothing for yourselves and for your offspring. Two of all your species he sent into the Ark with Noe that you might not be lost to the world; besides which, he feeds you, though ye neither sow nor reap. He has given you fountains and rivers to quench your thirst, mountains and valleys in which to take refuge, and trees in which to build your nests; so that your Creator loves you much, having thus favoured you with such bounties. Beware, my little sisters, of the sin of ingratitude, and study always to give praise to God.”

As he said these words, all the birds began to open their beaks, to stretch their necks, to spread their wings and reverently to bow their heads to the ground, endeavouring by their motions and by their songs to manifest their joy to St Francis. And the saint rejoiced with them. He wondered to see such a multitude of birds, and was charmed with their beautiful variety, with their attention and familiarity, for all which he devoutly gave thanks to the Creator.

Having finished his sermon, St Francis made the sign of the cross, and gave them leave to fly away. Then all those birds rose up into the air, singing most sweetly; and, following the sign of the cross, which St Francis had made, they divided themselves into four companies. One company flew towards the east, another towards the west, one towards the south, and one towards the north; each company as it went singing most wonderfully; signifying thereby, that as St Francis, the bearer of the Cross of Christ, had preached to them and made upon them the sign of the cross, after which they had divided among themselves the four parts of the world, so the preaching of the Cross of Christ, renewed by St Francis, would be carried by him and by his brethren over all the world, and that the humble friars, like little birds, should posses nothing in this world, but should cast all the care of their lives on the providence of God.

The story of St Francis preaching to the birds