“If I looked into a mirror, and did not see my face,
I should have the sort of feeling which actually comes upon me,
when I look into this living busy world,
and see no reflexion of its Creator.”
John Henry Newman 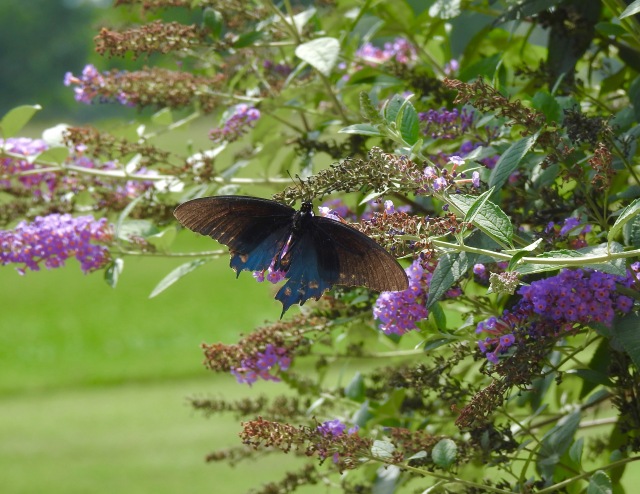 “The primary effects of original sin,
which are the deprivation of grace and the loss of eternal life,
are taken away by baptism or baptism of desire, but the other effects
are not.
These are the darkening of the intelligence,
the weakening of the will,
the casting of the emotions, into chaos,
and the corruption of human relationships”
Fr Benedict from the 2004 interview with John Bishop

In August, the waning days of summer are relentlessly hot and equally humid.
Here in the deep south there is no glimpse of that hopefulness known as Fall,
a change of season that just so happens to be on the very next page of
the calendar.

The butterflies, who may or may not be aware that changes are in store,
are at a near fevered pitch as they make their precarious mad dash
all around the yard in search of the those few brave flowers which
are still blooming despite most others having long dried and withered away.

The butterflies go about their task of nectar drinking right up to the moment
they simply fall to the ground and perish.
Their wings are now terribly frayed as the delicate colored powder
has all but worn away leaving their wings almost transparent…
yet the quest remains relentless.
They are driven by an innate need.

They are haggard and ragged and many are actually quite near death,
yet they continue on…
Much like the global Christian family during these waning days of
earth’s final glory.

Bruised and battered the ardent followers of Christ Jesus continue on,
ever forward, towards a final day…
sharing, preaching, seeking, offering…embracing the last word of Hope….

The times grow ever increasingly difficult to live and function in a fallen world
as the Faithful find themselves under constant attack.

Is it coincidental that in these dark days there should be a rise in the
attacks against professing Christians?

In the US the attacks are not the physical attacks seen taking place
elsewhere in the world, rather they are more legalistic and intellectual with a
heavy dose of shaming, smearing and shunning.

Yet oddly this global family, who profess to be Believers,
remains eerily silent.
Reminiscent of a day when those who shouted…
“you are one of them, you were with Him…”
With the panicked response being…
“you’re wrong, I don’t know what you’re talking
about, I don’t know them or Him…”

“Could you not remain, not stay awake, not even this one time when
I asked you, when I needed you…?”

The world is careening out of control…
While this season of change continues to descend.

A once great nation now loses her mind over a nearly once forgotten past,
refusing to turn around to recognize what the precarious future might be,
rather preferring to languish in what was.
As the world sits silently confused…waiting and watching…

Does the enemy care that a people now argue over changing the names of streets
while destroying the remnants of their their past?
No.
The enemy is glad and relishes in the stupid distractions.

For our’s is a fallen world, now spinning wildly out of control.
Her leaders and politicians vainly try to bring order to the chaos.
Her people race to undo their years of forward motion…
While no one seems to comprehend that there is but only One who
can and who will bring an end to the madness— as He is the only one who
can usher in the much needed order…

Near is the great day of the LORD, Near and coming very quickly; Listen,
the day of the LORD! In it the warrior cries out bitterly.
A day of wrath is that day, A day of trouble and distress,
A day of destruction and desolation, A day of darkness and gloom,
A day of clouds and thick darkness,
Zephaniah 1:14-15