“Apart from the cross,
there is no other ladder by which we may get to heaven.”
St. Rose of Lima 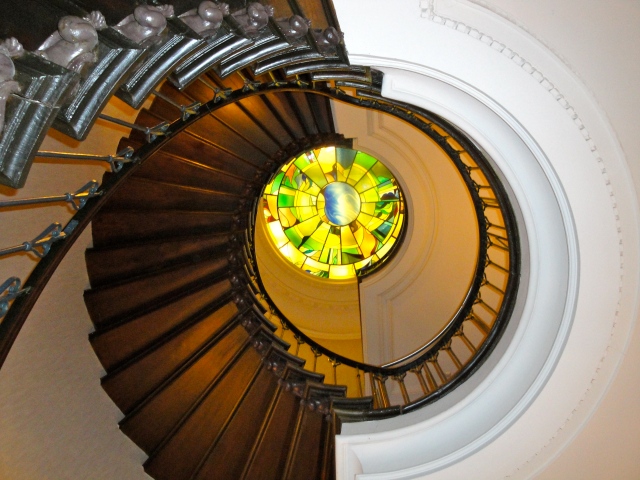 Remember back in the day, those heady days of the early 1970’s?
We had just crossed over the infamous Rubicon—a time of transition from the turbulent 60’s
crossing the threshold into a new decade—we did not want to look back.
Rather we crossed over, hoping the new decade would bring us
the gift of change….positive, war-free days change.

Musically it was a time just prior to the colorful days of spinning mirrored balls,
platform shoes, Night Fever and the world of all things Disco.
It was a quickly closing window of time…a time when rock bands still vied for the
waning spotlight.

It was a time when every sweaty-palmed young man and every young lady whose smile bore
the glint of silver braces, each felt a magical flutter when hearing the familiar and melodic
opening notes to the perfect slow dance song of all time—
the song that created an almost 10 full magical minutes of holding close slow dancing…

And if you listen very hard
The tune will come to you at last
When all is one and one is all, that’s what it is
To be a rock and not to roll, oh yeah
And she’s buying a stairway to heaven
Robert Plant, Jimmy Page / Led Zeppelin

Granted, I for one loved dancing to the song…especially if I was dancing
with “the one”—that particular boy who had stolen my fancy at that particular time
in life.

But I must admit, I often pondered those lyrics as the visual image of a stairway to Heaven
was akin to St. John Climacus’ The Ladder of Divine Ascent, also known as the Ladder of Paradise.

There were 30 rungs to the ladder…each a nod to the thirty some odd years of Christ’s life.
“It is the Divine model of the religious,
it presents a picture of all the virtues and contains a great many parables and historical touches,
drawn principally from the monastic life, and exhibiting the practical application of the precepts.”

And all of these thoughts came flooding to the forefront of my thoughts when I read today’s quote
by St. Rose of Lima.
There is no avoiding the cross as we look to climb the ladder to Heaven.

Many of the faithful, more of our Protestant brethren, often don’t understand what is
most often perceived as a bizarre and often macabre view of the cross, or crucifix,
that our Catholic, Orthodox and Anglican brethren seem to fixate upon.

And I for one tend to be one of those who look toward that cross.

It is the dark shadow of our faith that so many prefer to ignore or simply look past
pretending it doesn’t exist…but I see it for what it is.
The only means by which I now have hope.

For it there was no cross, there would be no hope.
If there is no decent into Hell, there is no ascent to Heaven.

It is the ugly truth as some would say…but I say it is the only truth.

There would be no Easter, no resurrection, without the cross.

We are told that we must carry that cross if we wish to live.
We can not avoid it.

There is no Easter joy if there is no cross of Good Friday.

The sacrifice had to be made if any of us were to be saved.

So yes, the cross is indeed our stairway to Heaven…

Arise, shine; for your light has come, and the glory of the Lord has risen upon you.
For behold, darkness will cover the earth, and deep darkness the peoples;
but the Lord will rise upon you, and His glory will appear upon you.
And nations will come to your light, and kings to the brightness of your rising.
Isaiah 60:1-3