We live in deeds not years In thoughts not breaths In feelings not figures on a dial. We should count time by heart throbs. He most lives who thinks most, feels noblest, acts the best.”
― Philip James Bailey

When my son was a little boy, he and I spent a great deal of time together. And not that it’s odd for a mother to spend a great deal of time with her child, my child happened to be only child with our living in a separate community from the one in which I taught, way back in the middle of 20 acres of woods. I was pretty much his only playmate, up until it was time to start school. His dad worked long hours so it was often just the two of us.

A favorite pastime would often find us curled up on the couch watching his favorite shows, with cartoons being a big part of our viewing. My dad had spent time with me watching cartoons so it just seemed natural for me to do the same with my child. And I must admit that those are some of the best memories I have of those simple easy days spent contently together–nothing special, no big deal–just he and I simply enjoying being together and laughing as we watched a silly cartoon

One of the cartoons we both enjoyed watching was the Goodfeathers.

Goodfeathers was the cartoon’s world take on the movie the Goodfellas. I’d never seen the Goodfellas movie but I knew enough about the movie to know that it was a story about the Mob. The cartoon was so tongue and cheek and such a funny take on the stereotypical life of Italian Americans and Mob life that I think I probably enjoyed it as much, if not more, than my son–and if the truth be told, most likely on a vastly different level. That subtle little nuances that only I could pick up on.

The Goodfeathers even had their own version of Marlon Brando’s role from the Godfather–a role portrayed by the Godpigeon. 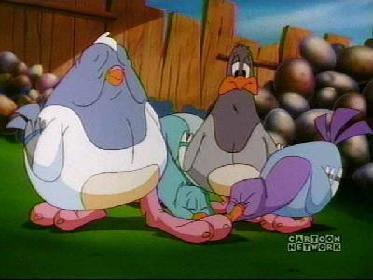 And so it was, on an idle evening stroll, along a beautifully old victorian era street lined with the brownstones of days gone by, that I spied a lone pigeon lounging along the rim of a bird bath. My proximity to him seemed to make no never mind, so I stopped long enough to take his picture.

Later, when I was actually going through the myriad of pictures I’d taken throughout the day, I noted the wary eye this pigeon shot my way–with the immediate thought and words of a young Robert de Nero—“What, You talking to me?”
Which in turn immediately sent my thoughts tumbling back in time, many years prior to a delightful time of joy and innocence when a mom and her young son lived a simpler time of contentment. . .