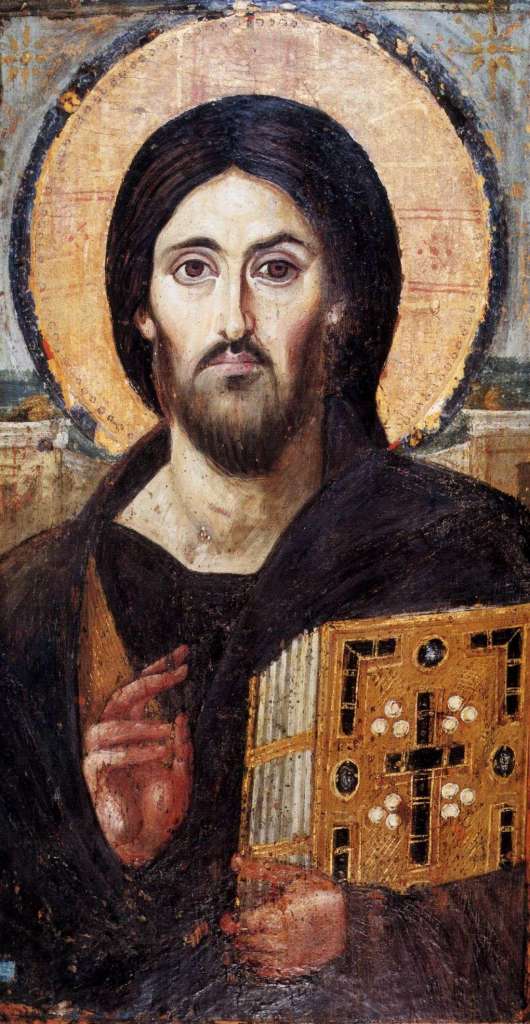 (the oldest surviving Icon or image of Christ, the Pantocrator / St Catherine’s Monastery, The Sinai Peninsula)

For the first time in 2000 years a Holy Mass for Easter will not have been held in Mosul.

“So what” you shrug…
“Who cares about Mosul?” you ask…
“Isn’t that in Iraq?” you quip…
“Isn’t Iraq Muslim?” you assume…
“Why would there be Easter in a Muslim land?” you espouse…

Well…yes, because for 2000 years there has been a celebration mass for Easter,
as well as Christmas and every other time a mass is to be said,
in what is now considered a Muslim land.

For Christianity has been practiced, as an organized religion, just following the
Resurrection of Christ, in this region of the world for the past 2000 years.

Christianity has been a long protected religious minority under the rulings and regimes
of various sultans, and in more recent times, dictators such as
the likes of Saddam Hussein and Muammar Gaddafi.

But how can that ever be…as we are left alarmed asking ourselves.

Because various Muslim leaders throughout the ages have in fact protected the
Christian Church within this Muslim land.

Not all of them mind you, but many have….as they have been tolerant.

In 1219, during the 5th Crusade, St Francis traveled from Italy to Egypt
as a Christian ambassador of sorts.
This was a time in which the Holy Roman Empire was fighting Muslims, Jews and heretics
in order to keep Jerusalem free and open to traveling pilgrims wishing
to visit the Holy Land.

But control of the region became a long, deadly and bloody conflict.

There was much stubbornness on both sides as each faction refused to budge in their
dominance of the region.
Countless lives were being lost and this grieved the heart of Francis.

Francis wished to share his faith with these unbelievers and if need be, he was willing
to die a martyr while proclaiming the Gospel to the unsaved.

Francis was opposed to the killings and bloodshed on both sides and had sought the
current pope, Pope Innocent III’s permission to travel to Egypt to meet with then Sultan,
Malik-al-Kamil,
nephew to the Great Kurd leader, Saladin.

Unarmed, history tell us that, Francis was arrested and beaten by the Sultan’s army.
He was eventually taken to the Sultan,
who was intrigued by this man who came wearing a tattered tunic
while carrying no weapons nor a quest for battle, but rather a love and desire
to share the word of God….
that being that Christ died to save sinners and his teaching was that the first shall be last,
the last shall be first and we are to love our enemies.

Francis won over the Sultan’s respect and favor….
And eventually following Francis’s safe return to Italy,
a peace was brokered between the Sultan’s armies and the European forces.
With Jerusalem once again being open to Christian pilgrims with a promise of
safe passage by the Sultan.

We know that there were a total of 9 crusades with the final fall of the final Christian
stronghold in Syria in 1291.
The land has been in Muslim control ever since.
And throughout the centuries that control has been both with and without toleration
for the minority people and faiths of Christianity, Judaism
and other minority sects..

But with the recent toppling of dictators such as Hussein and Gaddafi,
the vaccum which was created with their oustings has been filled by something
much more sinister and vile.

ISIS
The Islamic State in Iraq and Syria.

ISIS is not tolerant.
Not tolerant of even varying sects of Muslims who do not adhere to the Sunni ISIS strict
following of Shia laws.

ISIS is not a single man who one may perhaps find reason with or
in turn topple and remove.
Rather ISIS is a fanatical organization which will not rest until “the infidel” is vanquished.
And they do not care who or what stands in their way…nor how their ends are met.
No one is exempt from their terror..not children, women, the old or in firmed.
They give new meaning to the words barbarism and sadism.

Eliza Griswold, a journalist who recently returned from an extensive study of the region
and of this anomaly of the systematic eradication of Christians and others sects in places
such as Iraq and Syria, was interviewed by FOX News.

Mrs Griswold offers a very sobering account of what she sees as the death throws of the
Christian faith in a part of the world in which Christianity has
existed since its very inception.

She lays out the argument for the need to eliminate ISIS and its spawned fanatical groups
or either humankind will have to live with the stalk reality that entire ethnic groups,
such as the Yazidis, and certain religious peoples and their existence will be gone forever
from a land which is as old as time itself. And not only gone from a region of this planet,
but gone from earthly existence.

And so my question to all of us…
will the knowledge of this eradication be something we can live with…
down in the depths of our human knowledge and understanding…
and within the soul of our consciousness.
Or…
will we allow ISIS and all of its tentacles to spread as far as they wish,
eliminating huge swarths of humankind…
that is until we see them on our very doorsteps?

Please read the article, but more importantly watch the 5 minute video clip of the
Griswold interview. 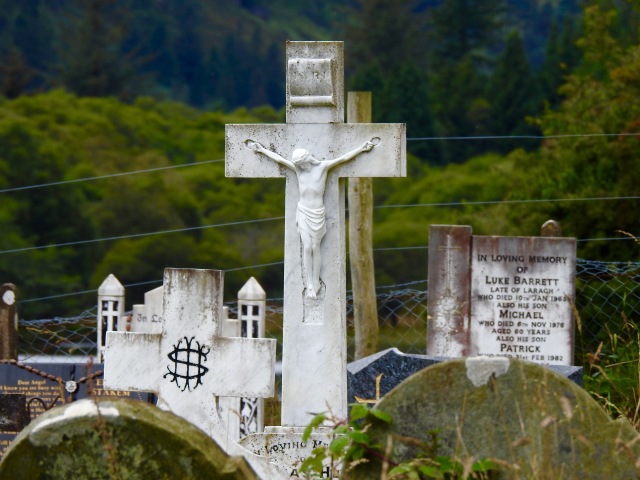 In 1219 a humble and simple Italian Franciscan monk ventured across raging seas and hostile lands with the hope of eventually crossing enemy lines in order to meet one of the most feared men of his time, Sultan Malik al-Kamil of Egypt… who also happened to be the nephew of the greatly feared Muslim warrior Saladin.

This was the height of the 5th Crusade. The Holy Roman Empire was embroiled, once agin with Muslim forces, as Jerusalem and what is known to Christianity as the Holy Lands, was under Muslim rule. Pope Innocent III and his successor Pope Honorius III, along with King Andrew II of Hungary and the Grand Duke Leopold VI of Austria launched a Holy Crusade to rid Christianity’s holiest city and her lands of Muslim rule once and for all. The irony here however is that Sultan Malik al-Kamil was actually one of the more tolerant Muslim rulers and allowed Christians living in and traveling to and from Jerusalem safe passage as well as greater freedoms than had previous rulers. Gone were the days of persecution and vast bloodshed. Yet the Catholic Church and most of Europe held the belief that the only good Jerusalem was a free Jerusalem.

Francesco Bernardone, affectionately known to us today as St Francis of Assisi, according to historical record longed to travel to the land of the Saracens not only to witness to the Muslims in the name of Christ but to broker peace. There is much debate over this encounter—had Francis simply wished to die a martyr in his hope to convert the Sultan as some historical documents record or had he hoped to intervene a peaceful solution putting an end to the ages of hostility, violence and bloodshed which had existed between these two religions for hundreds of years…scholars continue to debate these varying schools of thought.

The one fact however greatly agreed upon is that the meeting was one of mutual respect and peace.
Both men departed company with a lasting impression of mutual admiration and an understanding that each honored God…albeit in his own way.

As the world sits and watches the daily violence and mayhem unfolding within the very same region of the encounter of Francis and the Sultan…in Northern Arica and the Middle East, there appears to be an endless rolling wave of violence and bloodshed that seems to have been relentless since the dawn of mankind…as those deadly ripples reverberate ever outward into a gravely unaware world.

And it is during these global dark days in which my thoughts often turn to the teachings of that humble monk from Assisi.
I wonder how St Francis would view the current crisis with the current global assault by ISIS…
As this rising new unbending rule within Islam seems to lack the wisdom and tolerance of the long ago Sultan.

There is a historic meeting which is soon to take place.
It is a meeting between the two leading men who sit on the ancient thrones of their collective branches of Christianity.
Pope Francis, the Sovereign of Vatican City and the Bishop of Rome, the leader of the western Latin Roman Catholic Church, who is the 266th pope to sit on the throne of St Peter, will meet with his Orthodox counterpart, His Holiness Patriarch Kirill of Moscow, the leading patriarch of the Russian Orthodox Church.

This meeting is a first between these two branches of the same tree. Previous popes have attempted to meet with the Russian Orthodox hierarchy but the rift between these two “sister” churches is deep.
All of which indeed goes back to the Great Schism of 1054 when Christianity was divided between the Latin West and the Eastern Orthodox.

However with the Russian Orthodox the wariness seems to go even further as the Mother Church of Russia looks at the Latin Church as one who has long hoped to lure away the Russian faithful while the Catholic Church has long wondered how “close” the Russian Orthodox Church has been first with the ruling Tsar’s and then later with the Communist regime…with current continuing questions regarding the relationship and roll between it and Vladimir Putin’s government.

Yet it is with grave mutual concern over the rampant rise in global Christian persecution, especially in the region of Northern Africa and the Middle East, that these two holy men will put aside all differences in order to come together in a greatly historic and unprecedented union in hopes of creating a unified front, while the world watches and wonders how many more must die at the hands of barbarism before someone stands up and says enough is enough.

As the time of this historic meeting fast approaches, may our collective Christian families join together in united prayer for these two men as they prepare to meet later this month in Cuba.
May the Holy Spirit make His presence known and felt as these two men of deep Christian faith, who speak as representatives on the global stage for all of Christianity as well as humanity itself…may they find the necessary common ground within their shared faith, their love of Jesus Christ…may their two voices join as one as they speak for those who cannot speak.
May the world stop long enough to hear these two men’s collective wisdom which is steeped in the wisdom of the One True Spirit of God.
And may all Christians join together in support as we stand together as the Light shining in this every darkening world….