Even if I knew that tomorrow the world would go to pieces, I would still plant my apple tree.
Martin Luther 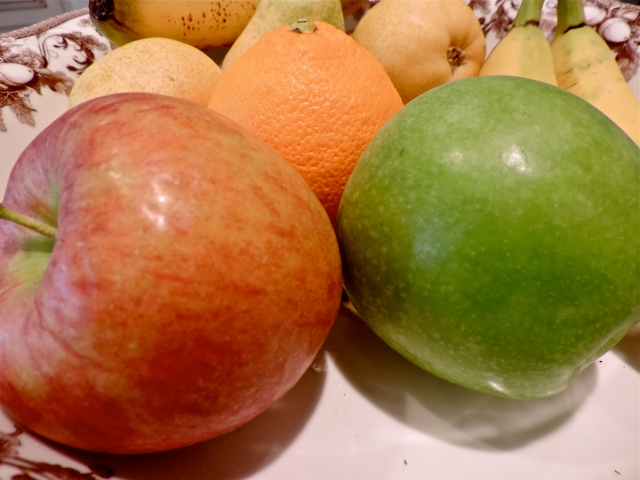 I don’t know about where you live but the temperatures are starting to take a bit of a nose dive. We actually had our first frost last night here in northwest Georgia as the thermometer dipped into the oh so low 30’s. The nightly weather reports have been dotted with the stories of the early snows throughout much of the country—news of such always puts me in the mood to be in the kitchen working on something warm, comforting and heavenly.

I had gone a bit overboard at the grocery store the other day buying, en masse, the beautifully displayed apples. I don’t know if I thought the apocalyptic end was in sight or that I wanted to keep every doctor within miles away but I found myself buying more apples than I really needed.

And there they were this morning, a bevy of beauties sitting all nestled in the bowl on the counter–waiting… waiting for me to do something magical with them….

First, let us gather our supplies shall we…..

You’ll notice the base will be: Apple Cider, and of course we need Calvados or any good Apple brandy; I had some leftover coke, why not; the juice from an orange, cinnamon, my delicious cinnamon simple syrup, cardamon–pods crushed or the powder; nutmeg–freshly grated; Vermont Maple Syrup (I order mine each year from Taft’s Milk & Maple Farm in Huntington, VT –talk with Mary–she is a wonderful person http://www.vtmaplesyrup.com ), honey (my son’s fiancé brought me a jar of Beekman’s Vanilla Creamed Honey–talk about decadent…it is laced with vanilla seeds and is truly heavenly–use sparingly as it’s just too good) Plus about 7 or 8 nice size apples. I mix varieties as some will turn to mush as they cook and others will hold their shape…providing a nice variety which is great for the “stew”….

I used a naval orange but you may use any type, even a tangerine—I’ve been known to use a lemon if I didn’t have an orange–you just want a little citrus….

Now you know I’m not one to measure so this may really throw some of you more exact folks out there a big curve–I measure with my eyes and my tastebuds…it’s from being the art teacher for all those years—eyeballing things just took over. And here is where I throw my Jessuit friend William, over on teilharddechardin.wordpress.com, a curve ball as to whether I am a type A or type B personality—-but in the kitchen my “little bit of this and a little bit of that” just works…..

Using a large deep saucier or soup pot, pour in probably about 2 cups of the apple cider, probably 1/2 to 3/4 cup Calvados, part of the left over Coke-if you don’t have a Coke or don’t want to open one for this, don’t–it’s not crucial. Squeeze half or both halves of the orange, pour in approx 3/4 cup maple syrup–we’ll probably need more later. Pour in 1/2 cup of Cookie’s cinnamon simple syrup if you made it, if not just add more ground cinnamon and maple syrup. Several shakes of ground cinnamon, cardamon, a couple of gratings of the fresh nutmeg– bringing it all to a boil–now reduce to a simmer while you prepare the apples.

Wash your apples—I like to spray them with “Fit”–it is a fruit and vegetable spray/wash that helps to remove that waxy business the producers like to coat the fruit and veggies with….yuck…. Spray with the Fit, rub all over, rinse well.

Next you may use an apple slicer which makes this little chore rather effortless or you can simply cut into 8ths. I do not peel my apples as the skin adds such a nice textural quality to the end product but if you want to be a purist, peel away.

Once the apples are sliced, place them in the pot of simmering deliciousness. Your house is smelling really good right about now….. 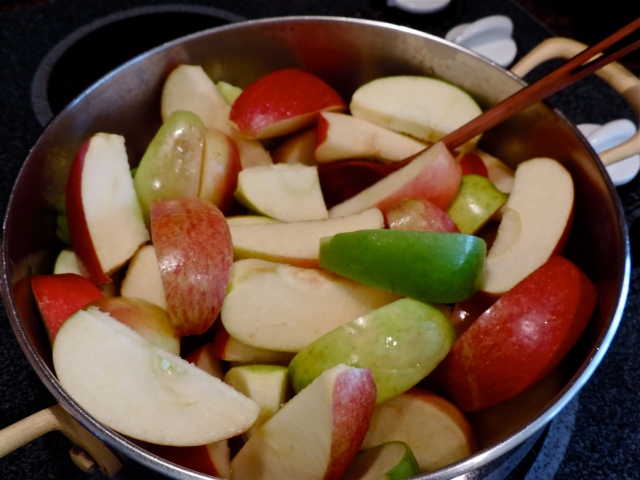 Bring the mixture, complete with apples, to a boil, stirring to coat the apples with the liquid as we don’t want them turning brown. Reduce the heat, cover (don’t fret if the lid doesn’t fit all the way down yet, the apples will shrink down)–allow to simmer about 20 to 30 minutes…stir ever so often. After about 30 minutes taste the liquid as the apples will now have released their heady juice—here is where you may need to add some more Maple syrup or honey. Just keep adding a little, tasting until the level of sweetness works for you.

At this point you can cut off the heat, allowing the apples time to ‘sit in their juices’ as it were–breaking down and absorbing flavor. I usually let them sit on the stove until later when everyone wants a bowl– I will then heat them back up, as serving them warm just seems best. You may certainly use them as a side if serving some sort of pork or on their own as a desert. I’ve been known to heat a bowl for breakfast or ladle over oatmeal…so versatile, healthy and oh so heavenly divine. 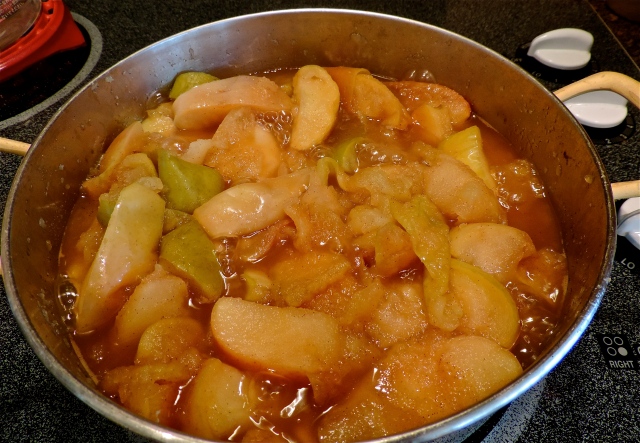 Serve them warm in a bowl topped with vanilla ice cream or a little whipped cream, or serve plain….this is what the doctor ordered on a chilly day…can’t get much better than this……