Piglet sidled up to Pooh from behind. “Pooh?” he whispered.
“Yes, Piglet?”
“Nothing,” said Piglet, taking Pooh’s hand. “I just wanted to be sure of you.”
― A.A. Milne, Winnie-the-Pooh 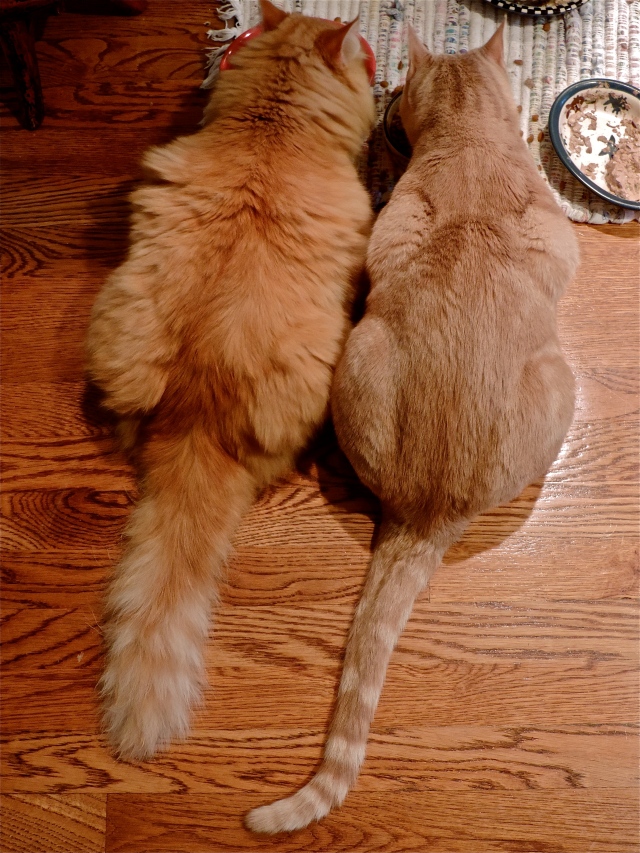 The above image is of my two cats. They are not related and differ in age by almost 5 years with the smaller orange puff ball on the left being the “old lady”. Do not let her fur fool you, she only weighs a tad over 5 pounds. The lean long one, my “little boy”, on the right is just 2 years old and weighs a whopping 15 pounds.

These two cats are both rescues. They have come into our lives to only enrich our world. I know what your’e thinking…you’re saying you know how cats can be—temperamental, distant, self-centered. But these two are different, with the younger one especially being most attentive, attached and engaging—not only to us, but to the older orange cat as well.

There is something quite touching and wonderfully assuring when watching and observing the behavior of two animals, especially animals that are not related by any sort of litter, with even those of different species being most magical, who develop deep bonds. Yes, I do believe pets, as those among us who have pets will no doubt agree, that pets do and can love us as we love them. I also believe that animals can feel a sense of “love” in the bonds that are forged between not only pet and owner but with a “fellow” or similar pet.

I say all of this as I ponder over the bonds and relationships we all develop in our lives. Be it bonds between family, friends, lovers, pets—we all seek a connection. It is an intrinsic need I suppose, that of connection. We yearn to bond with others. We bond with other people and we bond with animals–I suppose we have been hardwired to “bond”—as we are created by and in love to in turn love and be loved.

So imagine my deep emotion over this particular image that was posted on a blog that I follow. The image has been making the rounds on the internet and even through news media outlets throughout this past week. 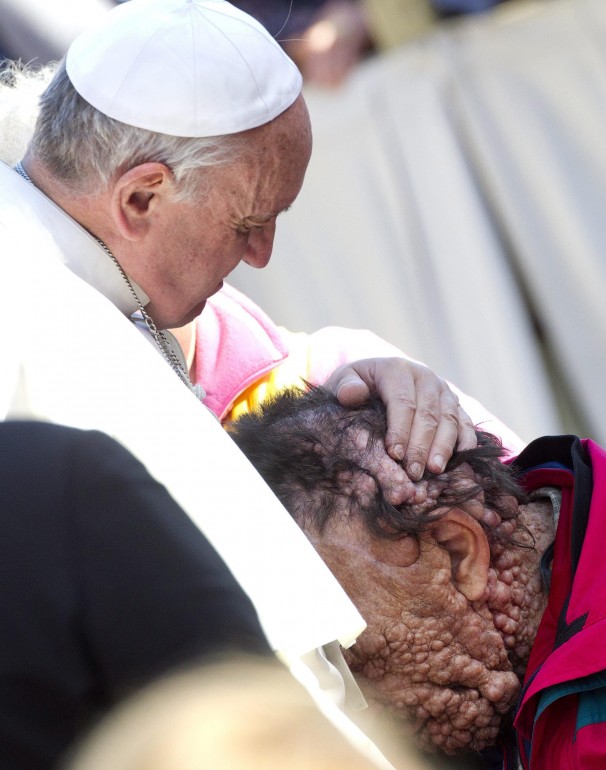 My friend Father Hugh, a Benedictine monk and priest who is from Australia and is currently serving in his ministry in England, has a blog that is both thought provoking as well as a place of comfort and refuge (http://hughosb.wordpress.com )

It was on his blog where I first saw this recent picture of Pope Francis embracing and praying fervently for a man who has what I am assuming to be the dreaded disfiguring disease of leprosy—and if not leprosy, an equally disfiguring disease.

At first glance one is not certain what it is that the Pope is holding but upon further studying of the image, it becomes clearly apparent and then very off putting and disturbing. The image is difficult to take in. One wants to look immediately away in shock and unease. It is troubling.

I was immediately moved to tears as I looked at the images—yes there are several images of this encounter but I have posted only one. The image has remained with me ever since I viewed it several days ago. There is tremendous power in this image and tremendous compassion.

I imagine life has not been kind to this man. By the looks of a few grey hairs I would suppose him to be in his mid 50’s on up—my age. However I could be wrong and he could be much younger or indeed, older. I would imagine that as the disease has progressed the sense of isolation this man has most likely experienced has also progressed.

I suppose he has been most lonely–as he has not been able to enjoy those moments out with other people that we all take for granted. No dining out, no movies, no trips to the mall, no visits to church, no attending a play or concert—lest the staring, the suddenly hushed tones of those who see him, the whispers, the sense of being most conspicuous–constantly hiding in the shadows as it were. In the middle ages lepers were made to wear a bell around their neck so that others would hear them coming and could avoid all contact.

A human who has been denied the opportunities that the majority of us take for granted of being able to forge our need for the bonds and connections of relationships. Even the very essence of our need as living beings, the need to touch and be touched, all denied this man.

Not only is it hard for me to look upon this man, the thought of touching and embracing him leaves me troubled. Could I so openly reach out physically to this man? I am ashamed that I have to “talk” myself into the actions of simply being a compassionate decent human being.

Pope Francis has given this man a most tender and precious gift–not just his prayers, as you and I can easily pray for this man, but the Pope is filling a most basic human need and desire in and for this man—to feel another human-being’s touch, warmth and embrace. To touch and be touched, to hold and be held, to love and be loved. . . despite appearance, despite disease—all basic needs we all take for granted every day.

There are many lesson here in this image and I shall leave them to you to discern for yourself as we will each, no doubt, take away a different one as it pertains to our different lives—may we be mindful that not all people on this planet are having the basic human needs met. There is tremendous isolation and loneliness for so very many. Not necessarily to the extreme such as a leper , but isolation just the same–the lack of relationships and bonds forged by one human to another.

May we, may I, look beyond the visible surface of appearance–reaching out to those who yearn to be touched and loved and connected. . . to those who just wish to be sure of the companionship of another human being who recognizes that they too are human beings longing for recognition and for the connection of a deep intrinsic bond–to touch and be touched. . . to love and be loved—Amen, Amen