O Father, in your Truth (that is to say, in your Son, humbled, needy and homeless)
you have humbled me. He was humbled in the womb of the Virgin,
needy in the manger of the sheep, and homeless on the wood of the Cross.
Nothing so humbles the proud sinner as the humility of Jesus Christ’s humanity.
St Anthony of Padua 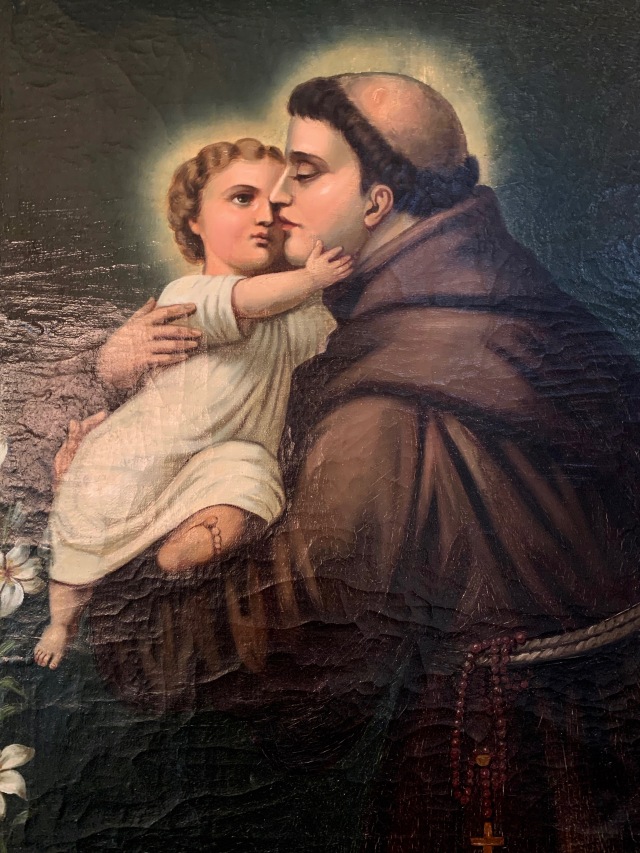 “The man who is filled with the Holy Spirit speaks in different languages.
These different languages are different ways of witnessing to Christ,
such as humility, poverty, patience, and obedience;
we speak in those languages when we reveal in ourselves these virtues to others.
Actions speak louder than words…
it is useless for a man to flaunt his knowledge of the law if
he undermines its teaching by his actions.
But the apostles spoke as the Spirit gave them the gift of speech.
Happy the man whose words issue from the Holy Spirit and not from himself!
We should speak, then, as the Holy Spirit give us the gift of speech.
Our humble and sincere request to the Spirit for ourselves should be
that we may bring the day of Pentecost to fulfillment,
insofar as he infuses us with his grace, by using our bodily senses
in a perfect manner and by keeping the commandments. ”
St. Anthony of Padua
Excerpt From
Witness of the Saints, p. 492

Here is the link to a small story about me, St. Anthony and the image of the painting
I’ve chosen for today…

ora pro nobis—pray for us

We may despair at scandals we hear about in the Church.
True reform may seem impossible. Beware the tempter! Rather than succumbing
to the despair and apathy to which the tempter seeks to lead us,
let us instead embrace God’s call to share in Christ’s sonship and participate
in his work of redemption…
Transformation is possible, but only to those who trust in him.
Michael Patrick Barber
from Salvation: What Every Catholic Should Know

“Mary remained with the donkey at the very entrance of the street while
Joseph sought a lodging in the nearest houses—in vain,
for Bethlehem was full of strangers, all running from place to place.
Joseph returned to Mary, saying that as no shelter was to be found there,
they would go on farther into the town. He led the donkey on by the bridle,
and the Blessed Virgin walked beside him. When they came to the beginning
of another street, Mary again stopped by the donkey,
and Joseph again went from house to house in vain seeking a lodging,
and again came sadly back. This happened several times, and the Blessed Virgin
often had long to wait.
Everywhere the houses were filled with people, everywhere he was turned away …
Joseph led the Blessed Virgin to [a] tree, and made her a comfortable seat
against its trunk with their bundles, so that she might rest while he
sought for shelter in the houses near. …
At first Mary stood upright, leaning against the tree.
Her ample white woollen dress had no girdle and hung around her in folds:
her head was covered with a white veil.
Many people passed by and looked at her, not knowing that the Redeemer
was so near to them. She was so patient, so humble, so full of
hopeful expectation.
Ah, she had to wait a long, long time;
she sat down at last on the rug, crossing her feet under her.
She sat with her head bent and her hands crossed below her breast.
Joseph came back to her in great distress; he had found no shelter.
His friends, of whom he had spoken to the Blessed Virgin,
would hardly recognize him.
He was in tears and Mary comforted him.”
Bl. Anne Catherine Emmerich, p.185
An Excerpt From
The Life of the Blessed Virgin Mary From the Visions of
Ven. Anne Catherine Emmerich