“The purpose of life is not to be happy.
It is to be useful, to be honorable, to be compassionate,
to have it make some difference that you have lived and lived well.”
Ralph Waldo Emerson 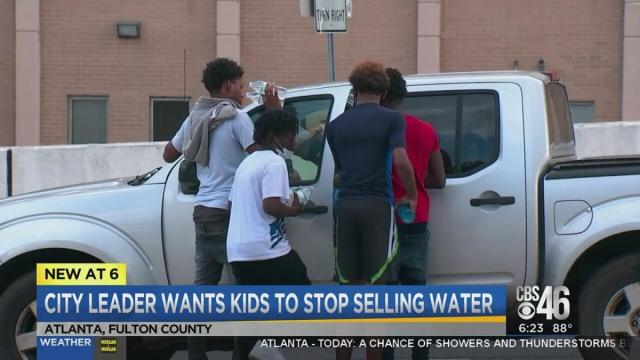 This is an image of young boys in Atlanta, swarming a vehicle,
while attempting to peddle water.

And the following is a recent news story regarding these “Atlanta waterboys”
I’ve cut and pasted part of the story—the full link follows.

Once you finish reading the news story, I will share a little story,
that happens to be on a more personal level,

It has become a common sight around the city of Atlanta —
groups of boys selling bottled water at intersections of busy city roads.

Recently, some of those kids have started to get violent with drivers.
Now, several victims are calling on the mayor, Atlanta City Council and
Atlanta Police Department to put a stop to what many are describing as a growing problem.

In an interview with Channel 2 Action News on Monday,
Atlanta Mayor Keisha Lance Bottoms described some of the teens as
“up-and-coming entrepreneurs.”

She’s even created an advisory committee that’s going to come up with possible solutions
for the kids who want to continue selling water in a safe manner.

But Channel 2′s Michael Seiden has spoken with victims who say enough is enough
and that it’s time to get the kids off the streets before someone gets killed.
Antoinette Stevens said she is still in pain following a frightening encounter
with a group of teenagers selling bottled water on University Avenue in
southwest Atlanta on Friday afternoon.

She still had the black eye to prove it.
“I gave him a couple dollars, and then all the other boys ran up to my car and were like
‘Oh, give me a dollar. Give me some money,'” Stephens said.
That’s when she said one of the boys reached through her window and snatched her purse.
Stephens said she tried to chase after him,
and another teen jumped into the driver’s seat of her car and took off.
“I jumped through the window and tried to get my car.
Try to get him to stop. And he drove into oncoming traffic and crashed the car, and then ran,” Stephens said.
She said that was when she hit the ground, leaving her with a black eye.
Stephens showed Seiden photos of her damaged BMW.
She picked it up Sunday after spending several hours in the hospital.

And we’ve learned she’s not alone.

So a couple of weeks ago, I was up in Atlanta visiting the Mayor and Sheriff.
That means that I was also visiting their parents.

Our son is working from home (who isn’t these days) and often puts in a 12 hour day.

After he got off work, it was after dark but he was wanting to just get out of
the house for a bit.
So we all loaded up in his Ford F150 truck to head to a nearby Walgreens inorder
to pick up some things for the kids, like diapers, etc.

Next he thought a nice drive through Buckhead seemed warranted.
What with all the new buildings going up and everything being lit up,
he thought the kids would enjoy seeing the big buildings and shiny lights.

He pointed out to me where, just a few weeks prior, rioters had smashed windows
and burned shops, restaurants and businesses along Atlanta’s famous Peachtree St.

Thankfully things were being lovingly put back together again.

This was the same area that my mom had grown up in both before and after the War—
long before the current boon of highrises and sky scrappers.
She and my aunt would make their way along the same sidewalk we were passing,
on their to school each day.

My dad and mom’s houses still stand on a nearby small side street.

We had made our loop and were headed home when we stopped for a red light at the large
intersection between Lenox and Phipps Malls.
There are probably 6 lanes of traffic here and it is a very busy
and a very congested area.

Suddenly, in the dark, a team of young black boys popped up on both sides of our vehicle
bamming on the windows holding up bottles of water.

My son was so taken off guard, it scared him to death.
Both my daughter-in-law and I were familiar with these “waterboys”
as we’d each encountered them…albeit in broad daylight where things
are more readily seen.

These kids had on dark clothing, the street lighting was minimal at best and they
were more than reckless as they darted in and out of the moving traffic.
Traffic that most likely did not even see them…before it would be too
late and potentially deadly.

My son kept motioning to the boys to move on as we weren’t interested in buying water
at 9 PM on a Friday night. He kept repeating through the rolled-up window
“No buddy, no thank you”…
I was in the back seat sandwiched in-between both kids in their car seats when
one of the boys tried opening the door where my 14th-month-old grandson sat.

What would have happened had the doors been unlocked?

Thankfully the light turned green and the kids quickly moved on to the car behind us as
we made a hasty retreat.

My son was so disturbed and shook up because he knew that he could have easily run over
one of the boys as they did not care that they were weaving in front of and
in between moving vehicles.

I told him that they do the same thing near the airport but I’ve only encountered them
during daylight hours.

Once home he did a little investigating and discovered that these waterboys
are also known as ‘Atlanta’s yummies’.
They are kids that gang handlers put out on the streets to see what they can hustle while
also peddling water.

Atlanta’s mayor, Keisha Lance Bottoms has made it known that she feels that these kids
are just trying to make a few dollars in order to make ends meet at home.

“Youthful entrepreneurs”, she calls them.

This is not some sort of lemonade stand.

Just days following our incident, a motorist was gunned down by one of these boys
for refusing to buy water.

There have been stories of the trash and mess the boys leave behind on various street corners.
The fact that many of the bottles are simply used bottles and refilled.
And so when police officers attempted to round up the boys, the Mayor put a stop to it
as she proclaimed these are kids trying to make a buck.

This mayor is the same mayor whose name has been floated around as a possible
VP on Biden’s shortlist of contenders.

As mayor, I would hope her first thought would be to keep the kids safe, keeping them
off the streets, especially at night.
Also, their aggressive behavior, along with the increasing stories of violence,
should be a small clue and wake up call that selling water is not exactly their
sole intent.

So when we have mayors and other elected officials content and turning a blind eye to
groups of roving kids harassing drivers and threatening violence, why then are we
so surprised that these same elected officials find that the escalating violent riots plaguing
cities across this nation, is nothing more than mere expressions of civil frustration?

62 nights of on-going violent national eruptions—while some of our legislators such as
Jerry Nadler call it all nothing but a myth.

A myth that cities burn each night and windows are smashed and businesses
and livelihoods are destroyed.
The searing images are no myth.

We must be willing to take back our Nation.
We must pray for our Nation.

Posterity!
You will never know how much it cost the present generation to preserve your freedom!
I hope you will make a good use of it.
John Adams