“The truth does not change according to our ability to stomach it.”
― Flannery O’Connor

Truth…
an explanation or reflection of fact
The definitiveness of reality
No maybes, no what ifs, no possibilities
Only black and white
Clear cut
It is what it is….
Nothing more, nothing less.

Yet not all facts, not all reality, not all what it is, is… are welcomed.
Truth can be difficult, even painful.
It can be hard and humbling.
There are those who wish to distort, alter, change Truth…
Making it, the Truth, little and their own.

Yet the Truth was perceived as difficult and hard…
It was disliked and greatly resented.

However Truth is Truth…
It has a way of exposing all that is veiled in false reality
Those steeped in the falsehood of deceit and the selfishness of half truths, fought the living Truth.
It was decided that Truth had to be destroyed.
Truth was quickly and readily betrayed.

The Truth, in the life lived, was uncomfortable, it was despised and even rejected.
How is Truth, that which is, the reality of fact, to be rejected and ignored?
How can facts and reality, all of what is, is…simply be dismissed and denied?
How can Truth, which is the black and white of plain sight, be disfigured, misconstrued or perverted?

There were lies and distortion, twists and bends.
Attempts to disprove the embodiment of Truth…

However all the lies, all the altering, all the denying, all the twists and the bends failed.
Truth persisted.
It was not to be denied.

Yet the Truth would not, could not be silenced.
Truth could not, would not be easily nor neatly disposed of in Death.
For Truth has a way of persisting, remaining even triumphing over Death itself.

There continues to this day, those who labor to deny, to alter, to change, to warp,
to rewrite and to bend the Truth….
Preferring to live the lies, the half truths and the falsehoods of distortion, deceit and selfishness.

Yet Truth has a way of persisting, even outlasting all that which is not of Truth itself.
It outlasts all the lies, the distortions, the selfishness, the bending, the rewriting and the altering…
For in the end, that which is reality, black and white, plain and simple…
that which is of the Truth of the Word and of the Life lived through the Truth…
will be the only thing to endure….
Not even Death can deny the Truth…

“Today not only in philosophy but in politics, government, and individual morality, our generation sees solutions in terms of synthesis and not absolutes. When this happens, truth, as people have always thought of truth, has died.”
Francis Schaeffer

Man does not weave this web of life. He is merely a strand of it. Whatever he does to the web, he does to himself.
Chief Seattle

(images of both male and female green lynx spiders which blend in beautifully with the coral geraniums / Julie Cook / 2014—remember, I’m terribly fearful of spiders but the colors were such a draw, almost mesmerizing) 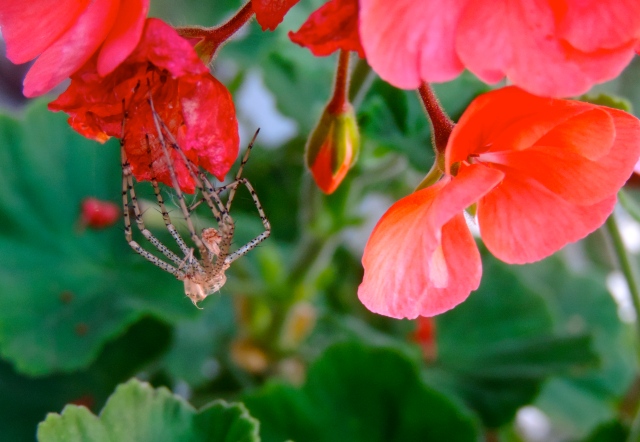 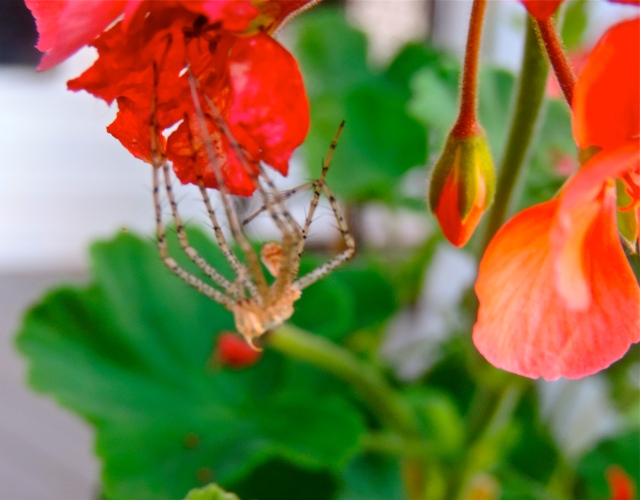 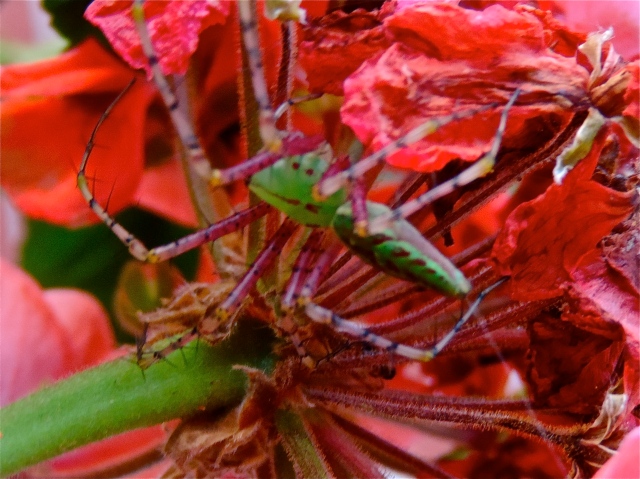 “Life is but a Weaving” (the Tapestry Poem)

“My life is but a weaving
Between my God and me.
I cannot choose the colors
He weaveth steadily.

Oft’ times He weaveth sorrow;
And I in foolish pride
Forget He sees the upper
And I the underside.

Not ’til the loom is silent
And the shuttles cease to fly
Will God unroll the canvas
And reveal the reason why.

He knows, He loves, He cares;
Nothing this truth can dim.
He gives the very best to those
Who leave the choice to Him.”
― Corrie ten Boom