“If I discover within myself a desire which no experience in this world can satisfy, the most probable explanation is that I was made for another world”
C.S. Lewis

“When there is no enemy within, the enemies outside cannot hurt you.”
African Proverb 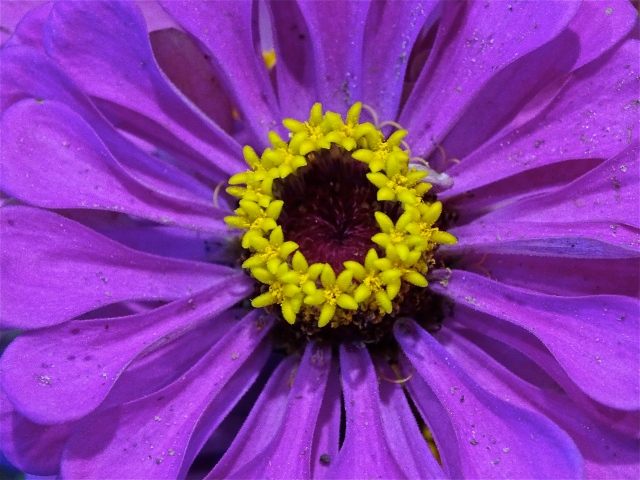 (the crowing tiny center of yellow, flowers within a flower, of a zinnia / Julie Cook / 2015)

What is your mettle. . .the stuff of which you are made?
What lies within your thoughts, your heart, your soul?
Are you afraid of what others may find,
or perhaps more afraid of what you yourself may find?

Is there beauty within?
Fruits and peace of a kind and gentle spirit?
Or perhaps dark secrets, chaining you to a dark past, when only a clear future is all that should lie ahead. . .

Is there serenity settled safely within,
of which you may in turn offer to those who surround you in need?
Is there a centering anchor which holds you fast during the raging storms,
affording you the opportunity of reaching out with both hands to those caught in the seething maelstrom?

Recall, remember and claim each and every day that which lies within. . .
that which lies deep past the silly worries and hurts. . .
past the petty harborings of slights and slurs. . .

For deep within, in the very center of self, lies a tiny light Divine
Inviting,
Welcoming,
Warming
Hopeful
and always
Comforting. . .

I pray that out of his glorious riches he may strengthen you with power through his Spirit in your inner being, so that Christ may dwell in your hearts through faith. And I pray that you, being rooted and established in love, may have power, together with all the Lord’s holy people, to grasp how wide and long and high and deep is the love of Christ, and to know this love that surpasses knowledge—that you may be filled to the measure of all the fullness of God.
Ephesians 3:16-19

“The ‘average sensual man’ who is sometimes unfaithful to his wife, sometimes tipsy, always a little selfish, now and then (within the law) a trifle sharp in his deals, is certainly, by ordinary standards, a ‘lower’ type than the man whose soul is filled with some great Cause, to which he will subordinate his appetites, his fortune, and even his safety. But it is out of the second man that something really fiendish can be made; an Inquisitor, a Member of the Committee of Public Safety. It is great men, potential saints, not little men, who become merciless fanatics. Those who are readiest to die for a cause may easily become those who are readiest to kill for it.”
― C.S. Lewis

When I was a sophomore in college I was required to take an upper level Lit class.
Now I’ll admit that I was never the best of students.
School was never terribly easy for me.
I was a slow reader, but yet I greatly enjoyed reading—especially if it was something I found to be relevant—particularly to my Christian spiritual development.

This particular Lit class was taught by a professor who was in his very early 30’s, not much older than his students. A free spirit who would come to class barefoot and sit indian style atop a desk as he lead conversation in whatever it is was we were currently reading.

He let it be known that he was a disenfranchised former Catholic turned atheist.

We read the works of men such as Kafka and Dostoyevsky.
Some of the material was bizarre and boring, others were not so bad.
He wasn’t one much for giving grades but up to the end of the course I was under the impression that I had made A’s, B’s and even a C on my written “critiques” of our readings.
That is until our last book, the book that the final exam would be based on. . .
The Grand Inquisitor by Fyodor Dostoyevsky
I thought this would be a book right up my alley as I found it intriguing.

I think my mistake was to take issue when this barefoot professor began to expose the questions and role of the Inquisitor against the silent Christ who was on trial, again so it seemed, for his life.
I defended Jesus to the Inquisitor who just so happened to be my professor. We went back and forth.
I later wrote with the same thread of thought when taking the final exam.

This had been the spring quarter so that meant we were all to depart for home at the end of the term.
These were the pre-email, internet, computer days so I would never know what I made on my final as we were all long gone and would merely wait for our grades to be delivered home during the summer via Post.

A couple of weeks went past when my grades finally arrived.
Opening the card and perusing the posted grades, I was shocked when I saw that I had failed the Lit class.
I was not only shocked, I was furious.
This would cause havoc to my GPA.
I had not failed a single paper.
I was never given any indication that I was in any sort of “academic” trouble. . .
How in the world could I have failed the course?
I did all of my assignments.
What grades I did receive were all very satisfactory.
I participated in all class discussions. . .
And that’s when it hit me.

I immediately called the University.
I was told the professor had resigned, moved on to the University of Arizona, taking all of his papers and records with him.
In other words, I had been screwed and there wasn’t a single thing I could do about it—
I couldn’t protest the grade as there was no professor nor “evidence” of paperwork in which to refer.
I get mad to this day just thinking about it all these near 40 years later.

I knew good and well, as I know to this day, that I failed that class because of my outspokenness of my faith and of my thoughts of Dostoyevsky’s Inquisitor verses Christ.

So when I read the Bonhoeffer reflection this morning. . .of his thoughts on radicalism (who else could so intimately understand the evils of radicalism than Bonhoeffer!!), and of his mention of Ivan Karamazov, I thought of a person who had, for whatever reason, grown at odds with God, who had left his faith for the emptiness of nothingness, taking his form of radicalism to the classroom, punishing anyone who stood on the opposite side of his internal angst.

Sadly today we see this same sort of issue of exploding radicalism across the country growing by leaps and bounds as there seems to be a growing intolerance against Christianity on any stage. . .be it on a college campus, in the news, laced throughout our entertainment industry and even in our political arena. We see it not as expected on the shores of foreign lands of the non-believers but we now see it growing on our own shores within our own culture

And yet our friend Bonhoeffer is actually writing into today’s lesson of his concern of that same sinister infiltration of radicalism seeping into the faithful—working to infest the faithful with a smug and pious self-righteous indignation. A radicalism which is witness to Christians using Christ more as a weapon and defense of their own agendas rather than embracing the pure message of selfless Love and of the Salvation found in the cross— and where that now in turn places the believer in the world. . .so now we see radicalism facing us, the Christian, on both our right and on our left. . .each from within and without. . .

The Rise of Radicalism
Radicalism always arises from a conscious or unconscious hatred of what exists. Christinan radicalism, whether it would flee the world or improve it, comes from the hatred of creation. The radical cannot forgive God for having created what is. It is Ivan Karamazov, the one totally at odds with the created world, who creates the figure of a radical Jesus in the legend of the Grand Inquisitor. When evil becomes powerful in the world, it simultaneously injects the Christian with the poison of radicalism. Reconciliation with the world as it is, which is given to the Christian by Christ, is then called betrayal and denial of Christ. In its place come bitterness, suspicion, and contempt for human beings and the world. Love that believes all things, bears all things, and hopes all things, love that loves the world in its dry wickedness with the love of God (John 3:16), becomes—by limiting love to the closed circle of the pious—a pharisaical refusal of love for the wicked. The open churn of Jesus Christ, which serves the world to the end, becomes kind of supposed ur-Christian ideal church–community that in turn mistakenly infuse the realization of a Christian idea with the reality the living Jesus Christ. Thus a world that has become evil succeeds in making Christian evil also.
Dietrich Bonhoeffer
Ethics 155-156 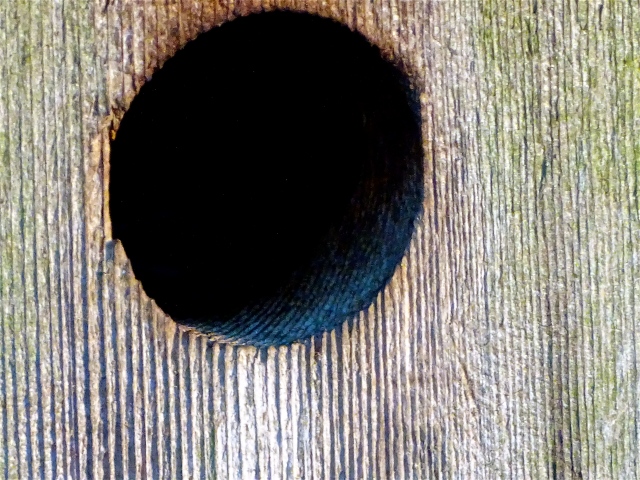 What lies within the heart of a man?

Yet, in the endowment of the gifts from the Master Creator,
The gift of freedom was to be paramount.
The ability to choose. . .
Right or Wrong
Truth or Falsehood
Love or Hate

Somewhere in the hidden places within,
A struggle ensues.
Wrestling with choice overshadows all. . .
And yet, there are those defining moments when
There are no battles, no conflict. . .
The decision is without choice. . .
And it is easily made 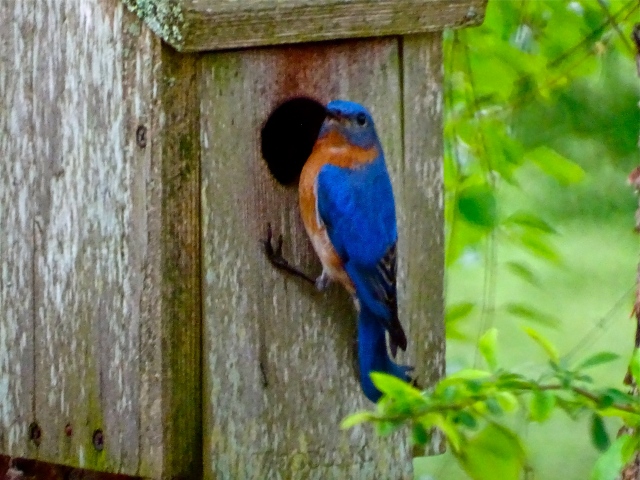