(the current veterinary hospital in my foryer)

We are four weeks and one day into our 12 week period of recuperation from
the joint fusion surgery.

I think from what I know now, I would opt to continue trying to exhaust the patchwork
fixes as this whole business is proving harrowing for both patient and caregiver.

Throw in having to race to care for ailing grandbabies—and you can just throw the title
exhausted nursemaid in front of my name and call it a day!

We have to drive an hour and a half over to the Veterinary surgeon’s office every
two weeks for a recasting and check on the progress of the leg.
In two weeks they will x-ray and hopefully transition from a club leg
to a smaller wrapping.

Oh did I mention that we had to have a special antibiotic compounded out at a
special Veterinary pharmacy in Arizona as he had a rare infection in the bone?

The pain meds fared no better.

When it was all said and done, I would have happily taken the syringe of pain meds
squirted in my mouth!

Two weeks ago, they had put the latest cast on a bit too high up the leg for the patient’s liking…
it hit that tender underneath skin (the leg and whole hip are shaved) and it was too
irritating to bear, plus he had peed all over it…
so…. we had to drive all the way back the following day for a rewrapping.

Have you ever seen a poor cat with a club for a leg attempt to get into a litter box???

Bless his heart is all I can say.

He simply lays down to do his business.
And then proceeds to accidentally step in it with the cast.

And of course, the litter box is actually in the cage he is to be calling home for these 3 months.
Making for some tight quarters.
Of which is a lovely addition to the foyer of our home.

Have you ever tried to vacuum and sweep up after a cat who can’t maneuver properly while
scattering cat litter all over the place?
I vacuum mountains of litter up, that have mounded outside the cage, at least twice a day,
all the while practically standing on my head in the cage.

And since cats, and this one in particular, are fastidious cleaners, he is constantly
whacking himself in the head with the club leg while attempting to groom himself.

So we have one miserable patient. 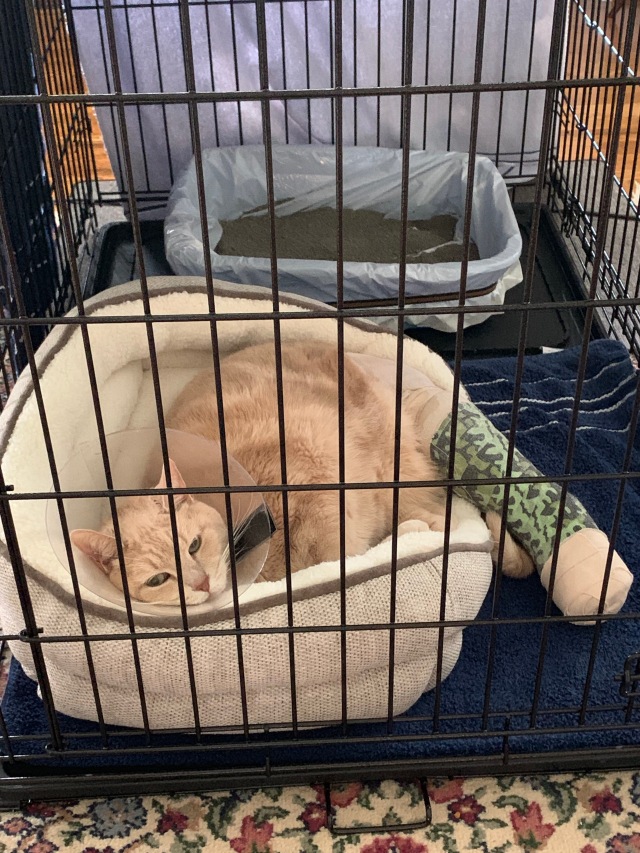 The nurse isn’t too happy herself.

And speaking of cones…

There are times when one just has to be coneless.
Such as when it comes time to eat.

His head is too far into the cone for him to reach the food…so…
when it’s time to eat and have some water, I let him out and remove the cone.

I’ll let him use his scratching post and simply sleep unencumbered but I must sit with him.
He has attempted several escapes by clumping up the stairs, dragging a club behind him..
or he slips and slides back to our bedroom.
He even attempted to jump up on the bed and fell before I could get to him.

And trying to get comfortable is not always easy 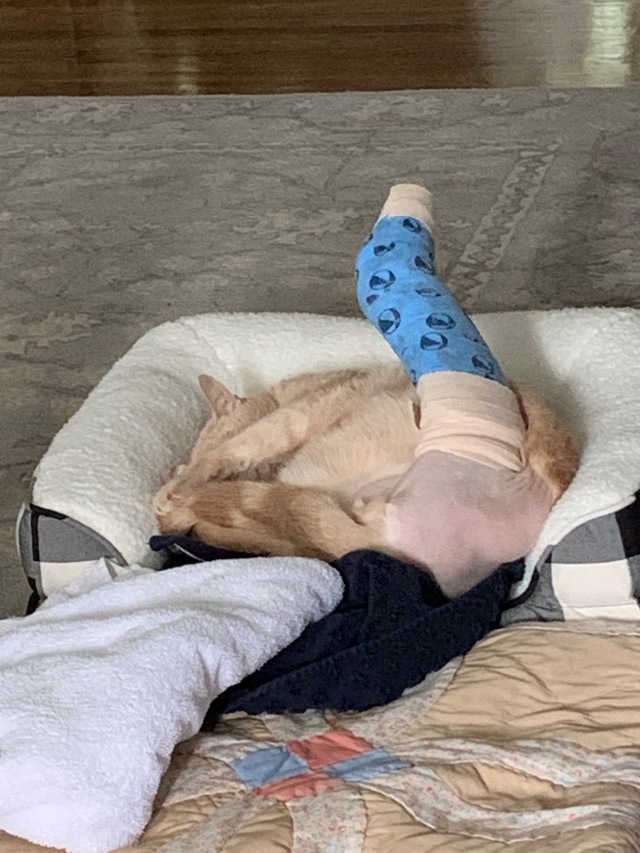 So the Vet told me yesterday, after examining the incision, that there is a
small reopening of the wound on the hoc (aka back knee)—of which is a product of the cast rubbing…
and so it is imperative that he remain as incapacitated as possible.

You’ve heard the expression about attempting to herd cats right?
Well trying to keep one locked up 24 /7 is just about as equally impossible.

And so I am reminded of the mantra I used as a young working mother.
We can do anything for two weeks.

As a young wife and mother, I loathed having to work when our son was little.
Unfortunately, we didn’t really have any choice–especially since mine was our only insurance.

I was always very selfish with my time outside of school as I wanted my time away from school
to be dedicated only to both my husband and son.

That’s why I never went on to get any advanced degrees after my bachelor degree.

I didn’t want to go back to school, work and then try to squeeze in being a wife and mom.
Something would be shortchanged and it wasn’t about to be my husband or son.

But I certainly don’t begrudge those gals who have to go it alone and have to balance
so many plates in order to make it all work for their kids—I just have a problem with the
“I can have it all” mentality while thinking there are no casualties left in the wake.

See, I’m old school in that regard—I don’t think women can have it all and be successful
at either work and mothering…let alone being a wife for that matter.
One or the other is going to suffer. That’s just a fact.
And if you think you can be great at each, you’re only fooling yourself.

I can remember once lamenting to a principal, who was my boss but also my friend,
that I never felt I was truly good at being both a teacher and a mother as I was
always going to be “half-ass” at best with both.

Plus I’m not one who thinks that a nanny, an au pair, a daycare, a sitter can ever do the
same thing a mother can do for her children.

And yet my son had to attend daycare.

I absolutely hated it but as my pediatrician always tried to reassure me,
daycare was the necessary evil in the lives of working parents.

I’d drop our son off each morning, then cry my way to work.

Guilt was my middle name.
As it often is with most working moms.

So once the summers rolled around, I guarded each and every precious second that I was able
just to be a wife and mom.
And that was one of the joys of teaching and being a parent—our schedules were in sync.

But as teachers, we were always required to earn hours towards our recertification
as well as participate in various trainings and workshops each summer.
Many of which would require about a two-week time slot.

So once we seemed settled, I’d find myself once again having to disrupt our “home” time
by getting up extra early, get my sleeping son up and ready for daycare as I’d then drive
an hour over to Atlanta for various teaching workshops at The High Museum of Art
or Oglethorpe University.
Returning back to town around 6.

I hated it but for both of us, but I would tell myself, I, we, can do anything for two weeks.

And so we did.

And now, as we seem to visit the Vet’s office for check-ups and recasting every two weeks…
I continue telling myself, as well as Percy… we can do anything for two weeks…
two weeks at a time.

And let us not grow weary of doing good, for in due season we will reap, if we do not give up.
Galatians 6:9