Democracy requires common ground on which all can stand,
but that ground is sinking beneath our feet, and democracy may be going
down the sinkhole with it.
Pat Buchanan 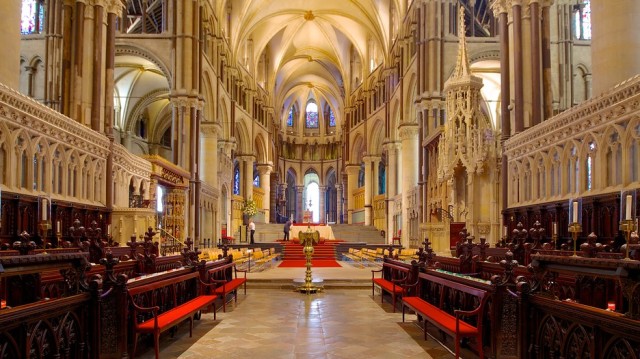 I grew up in a very large church in a rather large denomination in an
increasingly large city.

The Cathedral of St Philip.

A beautifully large Episcopal, southern Gothic, church reminiscent of something that
should have been found somewhere in the UK rather than Atlanta, Georgia.

The Cathedral is the diocesan seat of the North Georgia chapter
of the Episcopal Church in Georgia.

The Episcopal Church of America, in a nutshell, is a part of the World Wide Anglican Communion and is basically a sibling to the The Church of England.

Many consider the Episcopal and Anglican Churches kissing cousins to the Catholic
Church. And perhaps there is a good bit of truth to that as we are each liturgical
churches that follow a similar service format with very similar
creeds and doctrine.
Yet whereas the cousins are related, they are also different.
The cousins have a pope and we have the Presiding Bishop in American and the
Archbishop of Canterbury in the UK.

But what I do want to do is share a bit of sad frustration that just might have
finally found a slight ray of hope.

Have you ever found yourself on a sinking ship?
Probably not, but stay with me for a minute…

It is a ship that is actually on fire.
In the middle of a moonless night out upon a vast body of water.
You know the ship is burning as well as sinking…
plus you know you need to get off ASAP!

Problem is there are no lifeboats, no fire extinguishers…
the water is dark and cold as well as shark infested.
Your options are limited.
Things just aren’t looking too good.

I have felt this way for a good many years now.

Both The Episcopal Church and the Church of England have become that sinking
ship.

It’s a long story which I suppose got really going in the late 60’s
and early 70’s.

We may remember that we were coming off a very difficult time in the country.
Vietnam had been a mess, women were burning bras,
demanding equal rights, demanding the right to abortions,
while the youth had enjoyed a “season” of open and free love as we had witnessed
the demand for birth control and open sex.

That was also about the time women were wanting into the priesthood.
Then came the openly gay and practicing clergy.
Then came the approval of same sex marriages within the church.
Ad nauseum it goes.

As His word has been and will continue to always be that final word….
Yet that Word is basically being chopped to bits by the church…..
while the sinking has been hard.

That is part and parcel as to why I quit attending long ago as
I found it increasingly hard to reconcile myself with leadership of a church body
that made decisions that I believe run counter to the Word of God.
Yet my heart remained with the liturgical church.

I am a person who has always liked, as well as admired, those lone voices among
the noise.
Being a person who actually yearns for such voices.
Because I believe those voices speak of our hope.

The voices of those who stand alone in the desert while shouting to the moon
and back as to what is Truth.
Those who speak Truth while the entire world is losing its mind and running
like freaking lemmings to the cliff.

Think even Winston Churchill in our more modern times.

Think anyone who has seen the reality of the times and dares to speak up
by saying so.

I’ve just recently happened upon the blog of an Anglican priest who just so
happens to be one of those lone voices.

A single thread of sanity found in the middle of the madness.

His name is Gavin Ashenden and he is the former chaplain to the Queen…
a position he held until he could no longer support the direction in which the
Anglican Church was going…
that being to the cliff with the other lemmings.

Yesterday Father Ashenden posted a column by the a catholic priest, Fr Ed Tomlinson,
which has hit the nail squarely on the head for both these kindred siblings and cousins.

For you see what is happening in the Episcopal and Anglican Churches is just
a reflection of what is actually taking place on a larger stage.
It is a reflection which mirrors what is actually happening in both the
United States and Great Britain as a whole…
as we are currently watching both our Governments capitulate to all things
Politically Correct, those things deemed holy only by man and a blatant
refusal to acknowledge the Christian foundations of Western Civilization.

The ship is on fire, it is sinking fast and those of us who know better,
have got to get off ASAP but there are no lifeboats….

Below are a few key points from Fr. Tomlinson’s column along with a link to the
full post:

“A former Anglican Chaplain to the Queen, the Revd Gavin Ashenden,
is spearheading a revolt in the Church of England Synod over the thorny issue
of homosexuality.
Anglicans are talking openly about schism.
Catholics the world over should be watching very carefully.”

Anglicanism’s real problem has always been a theological schizophrenia –
the result, perhaps, of it having formed to appease a lusty monarch rather
than to preach a creed with clarity. Ask a hundred Anglicans what
Anglicanism actually is and expect a hundred answers.
The Church of England isn’t, really, one Church at all.
It’s an Erastian umbrella organisation holding together,
by virtue of the Crown, a huge range of competing theologies.

“And it didn’t take long for the liberal lobby, strengthened by trends
in society and over-represented on the bench of bishops,
to realise synod worked in their favour.
Did the Holy Spirit say no to women priests in July’s Synod?
Fret not: table the motion again in February, then repeat ad nauseum,
until the Holy Spirit finally gets the message!”

The second development which disrupted Anglican unity occurred when the
Book of Common Prayer became optional not mandatory.
You are what you pray: lex orandi, lex credendi.
With the shackles removed, parishes started to go their own way.
Today, there is almost no common ground between an evangelical parish
on one side of town and its liberal counterpart on the other.
This represents a massive problem for the Church of England:
how can you bring people together in love when there is zero shared praxis
between them?
The situation has become so grave that the Lambeth Conference can no longer be held,
due to deep divisions even at the level of the episcopacy.

So it is that the Revd Gavin Ashenden finds himself embroiled in this final
battle for the soul of modern Anglicanism. He and a few others are making
their last stand against the powerful modernist liberal consensus
that dominated the most recent Synod.

So I am somewhat hopeful when I read the tales that there are a few lone
voices still out there that have yet to be silenced by the masses…voices who
know the truth for what it is….
God’s Truth…

Then the seventh angel sounded; and there were loud voices in heaven, saying,
“The kingdom of the world has become the kingdom of our Lord and of His Christ;
and He will reign forever and ever.”
Revelation 11:15