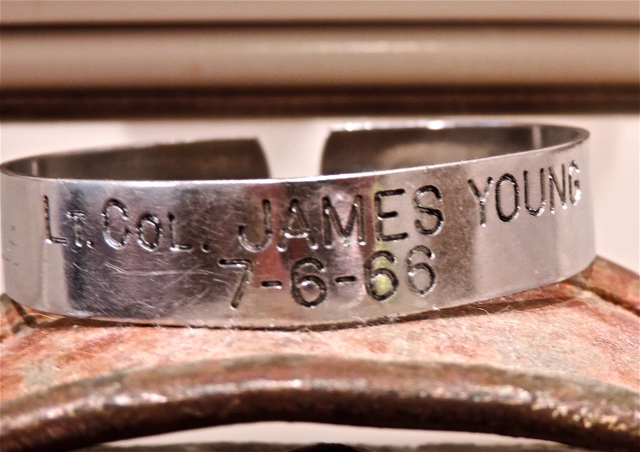 I am a tail-end baby boomer. Seems as if most people 45 and up equate their existence with being some sort of post war child…. be it WWII, Korea- as in my case, or Vietnam. An entire new generation will, no doubt, look to Desert Storm and the continued “wars” on terror as defining birthing moments of their own.

I grew up in the shadow of a deepening Cold War which helped to spawn the Korean War—oh, let’s not forget to call it by it’s politically correct name shall we…”Police Action”…hummm…a war is a war is a war…. no matter how you try to paint it, but there I go digressing…
Which then spawned the Vietnam War; oh pardon me, Vietnam Conflict…and so forth and so on…

When I was in the 6th grade, it became a popular trend for us (as I suspect it was for the adults) to all buy and wear POW bracelets. The one pictured above is mine, the one I wore for almost two years—never taking it off. If I remember correctly, one could pay $3.00 (I found the receipt for my bracelet in the box mementos…it was $2.75) to whom and where the money went evades this memory of mine—- in return you would receive a stainless steel “bracelet” / band engraved with the name of a serviceman who was currently being held captive by the North Vietnamese. You might have received the name of a POW or the name of a serviceman who was currently MIA / missing in action. It was just kind of the luck of the draw as to the serviceman’s name, rank and branch of service you received.

I received the bracelet of a Lt. Col. James Young who had been a prisoner since 1966, taken captive just two days following the 4th of July—already imprisoned 6 years when I received his bracelet. To me and my young mind, the best way to comprehend that length of time was to think of how many Christmases he must have missed being from his family…. which was something, to me, absolutely inconceivable—a true affront to all I considered sacred—Christmas with your family. How dare they keep our American soldiers like that!! It truly struck a chord deep in my young impressionable heart.

Every night, for what seemed most of my young life and of the memory of that time, as we ate supper, we watched a small black and white television set perched in our kitchen of the nightly news conducted by the deans of nightly news, Chet Huntley and David Brinkley. Those were the days of real news and real reporting…none of this stuff of today’s biased argumentative dribble passed off as news—no hokey sappy feel good “anchors” who seem more concerned with lifestyle choices, entertainment and droll government bickering than what truly constitutes real news. It was delivered professionally and basically unemotionally. Eric Severid or Charles Karualt would report from Vietnam.

The journalist would give the number tally of the day. Staggering numbers, unheard of numbers, the numbers listing each day’s deaths, those taken prisoner, those simply missing—ours, theirs, both. By the time I was in the 7th grade the newspapers were running the lists of names of those killed, wounded, or missing. Each day of our 7th grade year we would all scan the newspaper in search of word of our “soldier, airman, marine or sailor”—I suppose our teacher saw this as what is known as a “real teaching moment” something far more lasting than the lesson at hand, as she allowed us the time to scour a paper, to hope and perhaps even mourn.

I can remember very clearly, as if I am back in that classroom standing over the desk pouring over the paper, the day my friend found the name of her “soldier” on the list of those declared deceased by our government. We were all of the age of 11 and 12 and yet we felt a tremendous burden—a heavy sadness—rooting and cheering for men we had never met and most likely would never know personally, and yet how devastating it was to “lose” them to a death that was so foreign to us– as this drama played out so very far away from our sheltered world. The bracelet would then come off.

I also remember most vividly the day it was announced that this “war” was declared “over” and a peace accord was being signed by both our country’s two governments. On Valentines Day, most appropriately, 1973 the many American prisoners, many wounded and on stretchers, would slowly begin to transition from captivity to freedom, being loaded in batches of approximately 40 or so onto air force transport planes which were to carry them all, finally, home. Seven years just past the first day he was taken prisoner, Lt. Col. James Young headed home.

Warm tears are welling up in my eyes as I type this recalling, all these many years later, these most heartening of events. The bitter sweetness of the moment still very real, very palpable, very emotional. Coming home.

Our teacher checked out a television from the library, the ones perched on top of carts pushed to the room by the boys who volunteered to go get the carts long before this practice was deemed unsafe. She set the cart in the front of the room so we could all see the special news reports of those first prisoners landing at Clarke Air Force Base. I can still see, in my mind’s eye, Capt. Jeremiah A. Denton, Jr., the first POW to disembark the plane—his wife and daughter running, arms outstretched, to embrace him as he made his way down the ramp–now home on American Soil.

My POW, Lt. Col. Young, also came home—home to his family in Hollywood, Florida. Once he had returned, I wrote to Lt. Col. Young and his family. I can’t remember how I found his address. I in turn received two letters complete with pictures of Lt. Col. Young and his lovely family. His eldest daughter, Carrie, who was in her early 20’s when her dad finally returned home—she was but my age (at the time) when he was captured. She asked if I could have my name engraved on the bracelet that I had worn those two years, sending it to them as they were going to make a plaque of his bracelets. 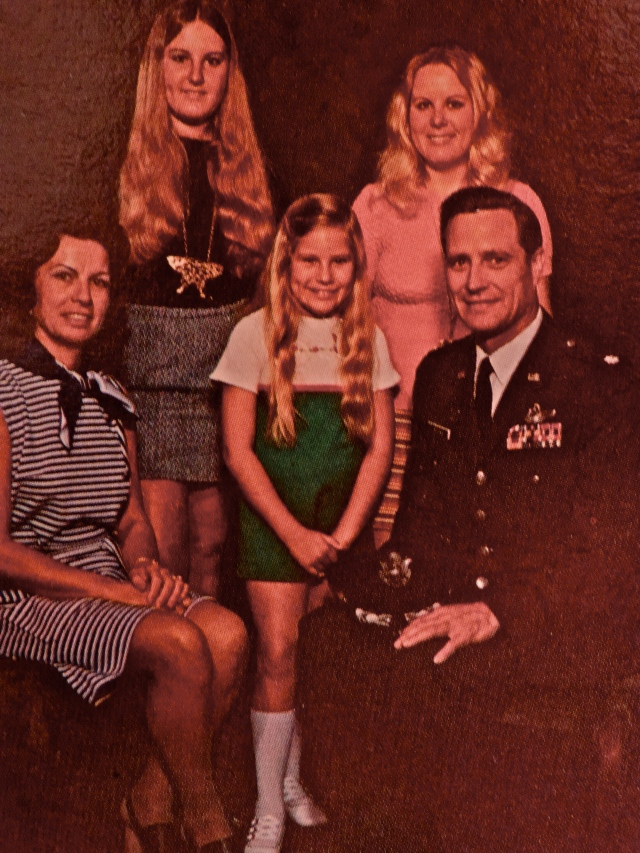 My mom took me to a jewelry store where I had my name engraved besides the name of Lt. Col. Young. I placed the bracelet in a zip-lock bag, writing one more letter. However at the last minute, I just couldn’t mail it. Something inside my young heart wanted to hold on to this tangible reminder of what this war had meant to me—a young 7th grade girl in Georgia.

All these many years later, I still have the bracelet, always knowing where it is. I recently did a Google search, attempting to discover where Lt. Col James Young was now—Sadly I learned that he had passed away a few years ago, a victim of Alzheimer’s disease. A tortured prisoner of war, Lt. Col. James Young had seven years of his life stolen, only to lose his final battle to a cruel and unseen enemy. Life never seems quite fair.

On this 4th of July, as this country of ours has troops spread out all over this globe, risking everything they have to protect, defend and serve each of us here back home…as we enjoy a slice of watermelon, swimming or watching baseball, spending time with our families, enjoying the fireworks this evening—may we all give pause this day in order to say a silent prayer for their safety, for the comfort of their families and a grateful thanks to all the veterans, past and present, who have sacrificed so very much for the one important thing that makes us who we are—our Liberty. 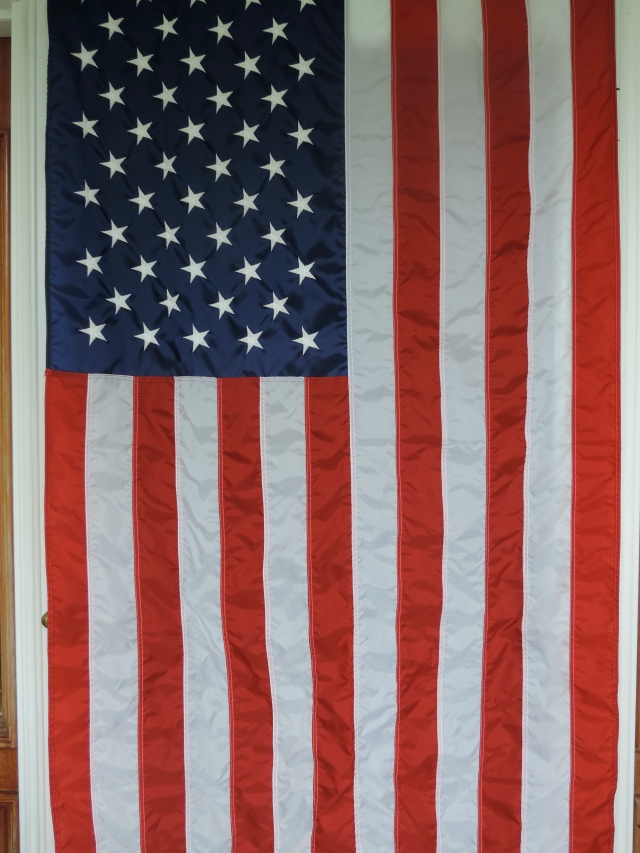